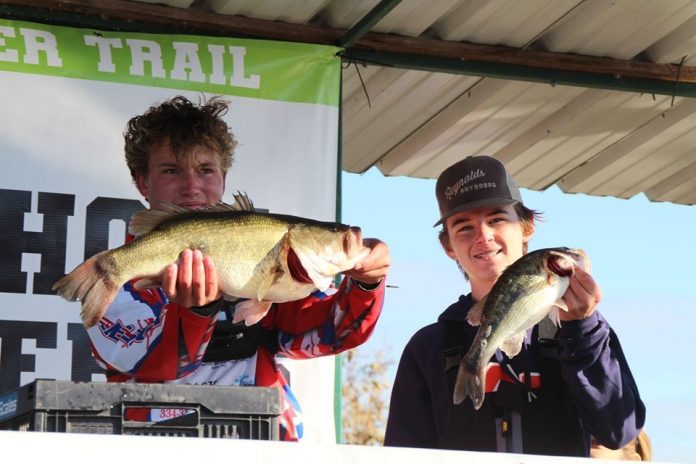 On Nov. 15, Lee-Scott Academy anglers Hagan Marlin and Dylan Ingram, reeled in the big one (in more ways than one), on WSAT’s final tournament of the season at Lake Eufaula.
Marlin and Ingram’s tournament weekend started with a prefishing/safety day that was windy, raining and in the 40s while they were on the water. They stayed strong through the adverse conditions and developed their plan.
On tournament day, they landed their first fish before 8 a.m. A little over an hour later, they reeled in a 6.45 pound Eufaula toad. They spent the rest of their time trying different spots and while they caught more than 10 fish, only those first two met the limit of 14 inches or more. As they weighed in and watched the remainder of the competition weigh in, they were a bundle of nerves. There was a lot riding on this tournament. Going into this tournament, they were in the lead for Angler of the Year title by three points. They knew that this was the second-place contender’s home lake.
Marlin and Ingram finished in ninth place, with a total weight of 8.42 pounds. This gave them four top-10 finishes for the four tournaments on this trail. They won “Big Fish” with their 6.45 pounder. With only these two fish, they managed to stay on top and win “Angler Of the Year” awards for the Wiregrass Student Angler Trail.
For more information about the Wiregrass Student Angler Trail, like and follow the organization’s Facebook page.
To learn more about Lee-Scott Academy, visit www.lee-scott.org. The school is located at 1601 Academy Drive in Auburn.