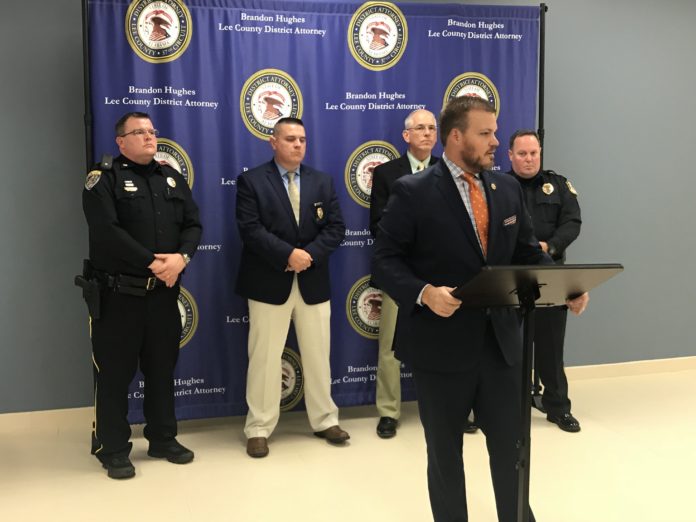 In a joint press conference last week, law enforcement agencies in Lee County and the Alabama District Attorneys Office announced the first distribution in the state of the opioid overdose antidote Naloxone to law enforcement.
According to a press release, more than 700 people in Alabama died from opioid overdoes in 2015 and the drug is an “easy-to-use antidote for overdoes of heroin or prescription opioid drugs.”
Lee County received a total of six Naloxone kits, with two going to each law enforcement agency in the county. Misuse of opioid drugs, also called narcotics, is on the rise across the country according to the CDC. The drug is 50 to 100 times more potent than morphine.
Hughes said these kits are a first opportunity to have a long-term impact on the opioid problem in Lee County, adding his office is committed to doing whatever it takes to help law enforcement first responders. “In 2015 when I started to run for district attorney, one of the things I thought was important for this office was to utilize its resources to help not only the citizens of Lee County but also commit to help the law enforcement of Lee County,” Hughes said. “There are certain places that are worse off than we are, but you can bet it’s coming. As leadership … its important to know what’s happening in your community, but I think it’s also critical to have your eyes on the horizon because often times, if you wait until the problem is upon you, it’s too late. It’s too late to make a discernible impact when you’re playing defense as opposed to offense.”
Hughes said that one opioid his office and Lee County law enforcement agencies are concerned with is fentanyl, a highly toxic drug that looks and feels similar to heroin. “To underscore what we’re talking about, if you take a packet of sugar (which is) roughly 1,000 milligrams … (only) 2 milligrams of fentanyl can cause you to go into an overdose state.”
According to information provided by the DA’s office, Naloxone is pure opioid antagonist meaning it immediately begins reversing the depression of the central nervous and respiratory systems caused by an opioid overdose. “They’re very powerful wand it could quite literally be the difference between an officer or deputy living or an officer or deputy dying as a result of exposure to a small, small amount to fentanyl,” Hughes said.
600 kits are being distributed statewide, and Hughes said Lee County was the first county in the state to utilize the devices, which cost roughly $4,000 per unit and were provided via a collaborative effort between the Alabama District Attorneys Association, the Office of Prosecution Services, the Alabama Department of Public Health and a partnership between pharmaceutical company Kaleo Pharma and Air University and Harvard University.
“We are very appreciative, on behalf of your sheriff’s office, to have this opportunity to have something we can use to protect our people whose mission is to go out and serve the public and to protect them,” said Lee County Sheriff Jay Jones said to the press. “This is a fantastic initiative as far as we are concerned to protect our first responders.”