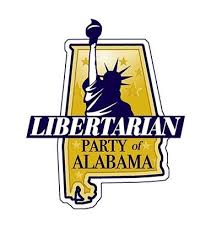 The Libertarian Party of Alabama (LPA) has approved the creation of an affiliate chapter in Lee County, Alabama under the name Lee County Libertarian Party (LCLP). The LCLP formative meeting was held at a local pub in Opelika. LPA State Secretary Paul Frankel and LPA Executive Committee At-Large Representative Frank Dillman were in attendance and available for guidance to the fresh group. Dillman, a resident of neighboring Macon County, has been key in the formation of the group. LCLP was formed in order to promote liberty in Lee County.
Peter Loyola, newly elected chair of the LCLP, said that the group is looking forward to tapping into the libertarian sentiment in the community and rekindling the message of liberty. The meeting consisted of approval of by-laws and electing leadership for the group. Along with Loyola as chair, Keller Williams was elected vice chair, Danielle Shamp elected treasurer, and Kaleb Corcoran elected secretary for the LCLP.
The Libertarian Party is the third largest political party in the United States, founded in 1971. Libertarians strongly oppose any government interference into their personal, family, and business decisions. They believe all Americans should be free to live their lives and pursue their interests as they see fit as long as they do no harm to another.
For more information, send inquiries to Frank Dillman at frank@frankdillman.com.