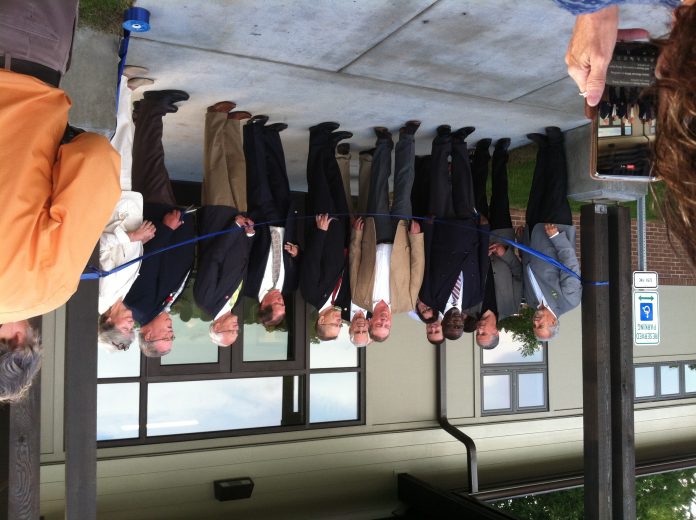 The Lee County Commission held its regular May 29 meeting at the new Beulah Senior Center, 1741 Lee Road 270 (east) to officially open this new facility. The $518,000 building was jointly funded by a $250,000 Community Development Block Grant and Lee County. District 4 Commissioner Robert Ham led the effort to secure overall support for the center, and outgoing state Sen. Gerald Dial helped secure the CBDG funds. Bridge Church of Cusseta donated land for the facility. The new 3,000-square-foot facility replaces the former center, a leaky, fire trap basement room in a 100-plus-year-old building near Beulah High School. Lee County commissioners, chairman Bill English, Sen. Gerald Dial, former Rep. Duane Bridges and other local leaders were present for the ribbon-cutting ceremony.
Torrential rains during the last week in May did substantial damage to county roads and bridges, particularly in the Smiths Station area where not only was total rainfall greater than much of the rest of the county, but where five to eight inches of rain fell in a three-hour period the night of May 22-23. Lee County Engineer/Highway Department Director Justin Hardee detailed, for the commissioners, the damage as well as initial actions taken to address the situation. County Highway Department personnel were called out at 1:15 a.m. and worked 19-straight hours, assessing damage, putting up barricades, removing debris and making temporary repairs where possible.
Damage included trees down across roads, flooded roadways, washed-out roadways, washed-out bridge approaches, at least one large culvert collapse, at least one bridge with structural damage serious enough to require replacement and one small privately owned bridge collapsed into the creek below.
Reaction to the culvert collapse, on Lee Road 238 east of Smiths Station, illustrates the resourcefulness of Highway Department workers. The department was notified shortly after 4 a.m. Wednesday morning that a 6-foot diameter culvert had washed out, taking large slabs of pavement with it. Personnel immediately put out barricades to halt traffic. After discovering that a replacement culvert was on hand, repairs commenced at about 9:30 a.m. and by 8:30 p.m., 11 hours later, one lane of the road was open to traffic.
Hardee deflected all praise to his employees, who, he said, had performed way beyond the call of duty.
Hardee also praised other county agencies including the Emergency Management Agency, the Lee County Sheriff’s Office and county Volunteer Fire Departments – especially the Smiths Station Volunteer Fire Department – for their actions.
Hardee reported that Joel Hunley, Lee County Bridge Inspector with more than 20 years of service, had personally inspected every one of Lee County’s 108 bridges for safety since the rains.
The commission also approved, subject to minor modification, a new county seal, appropriate for display on the exterior wall of the new county annex building now under construction adjacent to the courthouse. The old seal contained too much detail to reproduce in a scale sufficient for this sort of display.
After discussion led by designer Lindsey Tan, commissioners approved the interior entry design for the CSM Bennie Adkins Meeting Center on South 10th St. behind the courthouse.
The entry will be an educational tribute to Opelika Medal of Honor winner CSM Bennie G. Adkins. The county commission had previously voted $10,000 to pay for the design phase with the understanding that the actual construction costs would be funded by community donors. Adkins will provide artifacts for exhibit.
In other action, the commission:
• Received vacancy announcements for three commission-appointed boards (the East Alabama Health Care Board announced its desire to reappoint three members whose terms are expiring: Joel Pittard, 24 years on the board; and David Smalley and Larry Fillmer, each with 12 or more years on the board, and
• Completed right-of-way vacation for Lee Road 670, in the southwestern portion of the county.