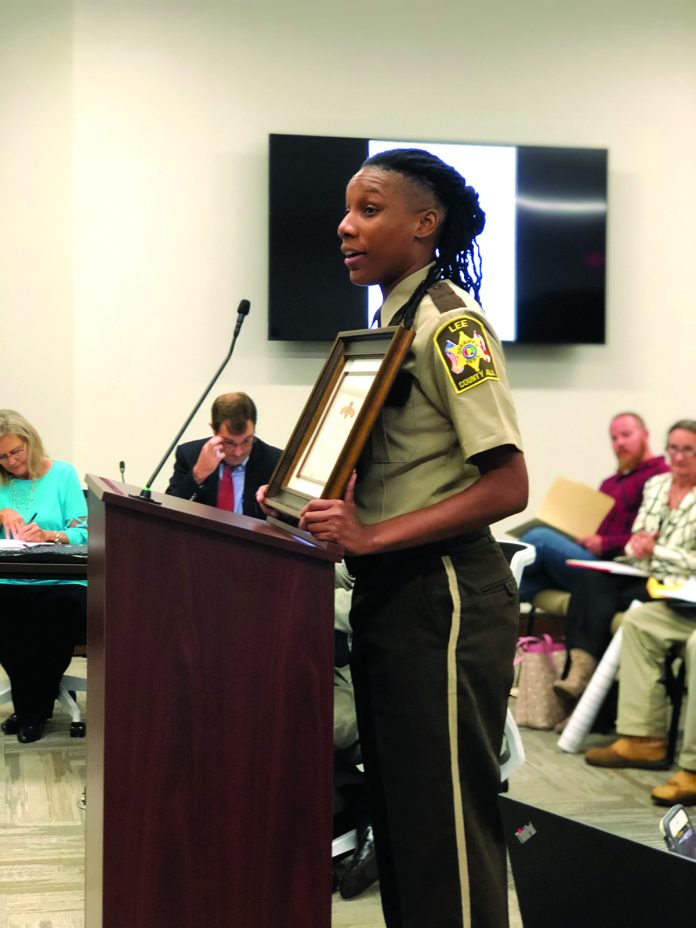 Auburn resident Goode Dorman was unanimously reappointed to the Lee County Board of Equalization during last Tuesday’s Lee County Commission meeting.
Dorman’s reappointment came on a recommendation from Lee County Revenue Commissioner Oline Price, who spoke of his consistent attendance to board meeting and his willingness to serve the public.
“Mr. Dorman has served close to 10 years on the board and has been an excellent member. This is one of those boards where continuity is imperative and it is important to have people in place who are aware and know what they’re talking about,” Price said. “It’s truly a labor of love.”
According to a description on the county website, the board of equalization is “comprised of three citizens of Lee County” who hear concerns about the fair-market value of property.
Sheriff Jay Jones brought Corrections Deputy Ashley Ogletree before the commission to speak about her contributions and recognize the vital role she plays with the Lee County Sheriff’s Office.
“We’ve got good people, but she’s one of the really good (people). She works hard every single day,” Jones said. “She represents all that is good with operations in law enforcement.”
District 5 Commissioner Richard LaGrand Sr. clarified confusion on a topic from the previous meeting regarding the county’s stance on the public nature of Lee Road 3 near the intersection of Lee Road 188. He successfully made a motion to “reaffirm the public nature of Lee Road 3 despite the fact that the county does not maintain the southern portion of that road.”
The commission also approved the signing of two Emergency Management Performance Grant Funding Agreements totaling slightly more than $72,000 which was presented by Lee County EMA Director Kathy Carson.
In other business, the commission:
-approved a re-subdivision of parcel B-100 of the Corbett Property Division, located along Lee roads 250 and 379, on the recommendation of Lee County engineer Justin Hardee
-approved a special event retail license for Twenty-One Acres, an event/wedding venue based in Auburn