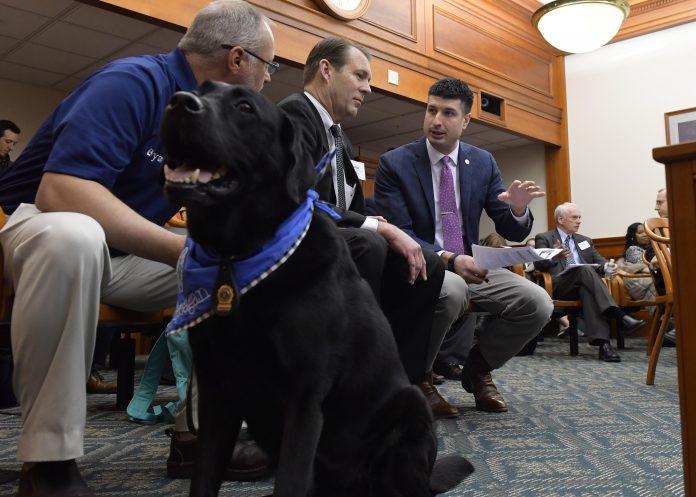 At a press conference in Montgomery last Tuesday, the Alabama District Attorney’s Association and the Office of Prosecution Services announced the expansion of the program in which specially trained dogs assist victims of crime when they testify in court or to investigators.
The program means Alabama is the first state in the U.S. to have a statewide facility dog program, and Lee County was the second among Alabama’s 67 counties to implement this new strategy, according to District Attorney Brandon Hughes.
“I pursued getting a dog because I saw the value in what a dog could provide victims and witnesses in our cases. I can’t speak to dogs in the courtroom because we have not utilized ours that way and I’m not real sure we would be able to in a jury trial. That said, I have seen the benefits numerous times when children have come into the office and been put at ease by having Chunk (our dog) in the room. Being reticent to speak to us, to describe what they saw or what happened to them, but when introduced to (our court dog) Chunk, they become more comfortable, more confident, and more willing to speak about what happened. Just the other day, a child sex assault case was reported. We showed up at the Child Advocacy Center with Chunk and it made a huge impact with the victim in the middle of a horrible situation.
The bottom line is that having an emotional support dog can be critical to lowering stress levels of crime victims, especially children and enabling them to ultimately be comfortable testifying in Grand Jury or during trial or simply during an interview,” Hughes said in a statement to the Observer.
For more information, visit www.alabamadistrictattorney.org.