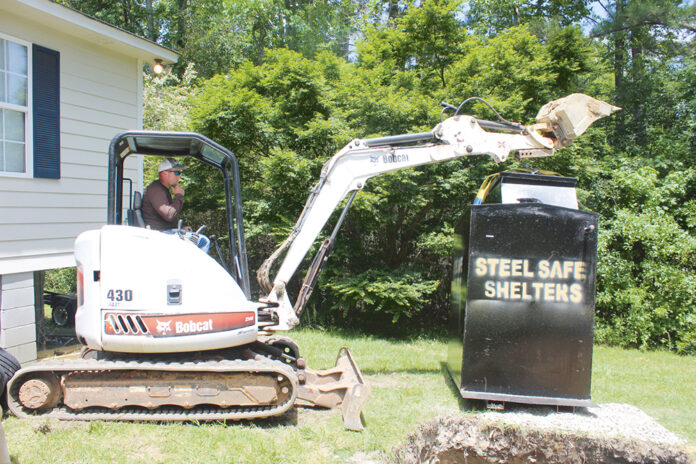 The storm shelters were first introduced after the Lee County tornadoes in 2011 and the county applied for a grant. The shelters were approved the following year.

“After the Beauregard and Smiths Station tornadoes in 2019, the previous director applied for mitigation funds for individual safe rooms and storm shelters,” Smith said.

There are 115 applicants for storm shelters.

Smith informed the commissioners at the last meeting that the Alabama Board of Architects and Engineers now requires a special inspection of the shelters after installation. She asked the commission to waive the inspection, which it declined to do.

The commissioners were concerned that this could place liability on the county, however, based on a section that Probate Judge Bill English pointed out.

The commissioners asked Smith to work with County engineer Justin Hardee to determine if it would be cheaper to have the board do the inspection or find an outside party.

Barrett-Simpson, Inc. was chosen as a private party to complete the inspections and this decision was communicated to commissioners on Monday.

“They’ve agreed to provide the verification services as outlined in the requirements so that the citizens will be able to receive the maximum reimbursement for the shelters that they must pay for upfront,” Hardee said.

Two weeks prior Smith had informed the commissioners that the cost of hiring an outside party would cost the county $46,000.

“After several discussions with state EMA, they have agreed to reimburse the shelter grants that are not approved yet, that are in the FEMA queue,” she said Monday.

The county will be responsible for $19,200, Smith said. The county may also receive some other reimbursements.

Since, English has been in court for the case.

“Lee County as a defendant settled in the federal election litigation on the last day of trial,” he said. “We got a very favorable settlement. It will not be an order entered by the judge. It was a settlement agreement; it will remain confidential.”

“That’s frankly probably a good thing, probably needs to be done anyway,” English said. “We have just broken the record for the most absentees in a presidential general election and we’re a month out.”