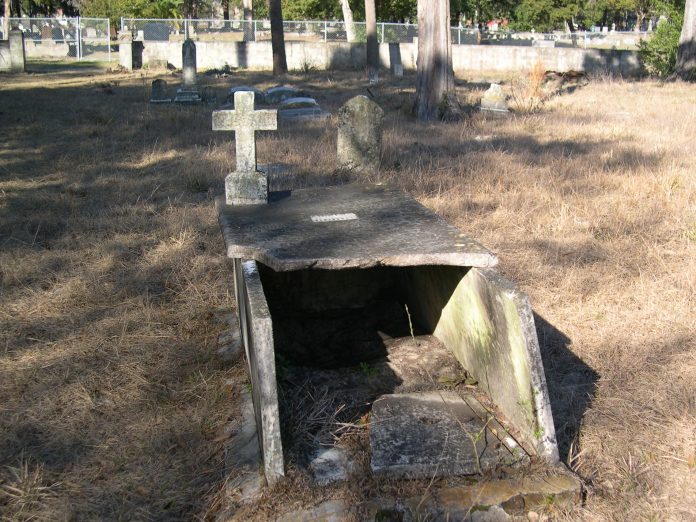 By Edna Ward
For the Opelika
Observer

The Lee County Cemetery Preservation Commission (LCCPC) met Jan. 19. This meeting was attended by six guests and three commissioners: Arthur Jones, Talitha Norris and Edna Ward.
Of special interest at this meeting was the present condition of the heavily vandalized County Line Cemetery located about six miles north of Salem. Most of the 40 engraved marble slab grave markers are now broken in many pieces. The estimated damage exceeds $50,000. The two stacked- rock graves have been reduced to rubble. A grave shed over a child’s grave was burned. Only charred remains of the shed lie scattered on the ground.
One guest, Sandy Lewis, started her journey on Thursday to Opelika from Tennessee to attend this meeting.
Although many roads in Alabama were difficult to travel because of ice and snow, she safely made the more than 300-mile trip. Lewis’ ancestors are interred at County Line. She and her friend were trying to put the pieces of Reuben Aldridge’s grave marker back together, but they were having trouble because shade from the tree canopy was heavy that day. “Before long the sun came out. With enough rays of light on the problem, they could see some of the pieces were upside down,” Lewis said. “When we turned them around, they fit. It was as if Reuben was giving us a little help.”
Other guests were: Dr. Robert Bubb, Patrick J. Kennealy with Tomb N’ Groom Crew, LLC, Michael Brown, Kelsey Bush and James Norris. The present condition and ideas for restoration of County Line were discussed, including a special wish for rebuilding the grave shed.
The identity of the decedent beneath the former shed is unknown. Commissioner Talitha Norris received an inquiry from a Boy Scout advisor about the possibility of a scout rebuilding the shed. Visitor James Norris,Talitha’s husband, often volunteers on LCCPC projects.
Dr. Bubb, of Auburn University Human as Development and Family Studies Department, has an interest in African American history as well as other public services.
He was willing to speak with Brian Cooley, also of Auburn University, who earlier evaluated the needs and suggested possible ways to repair the damage at County Line. For safety reasons, this project has been on hold during hunting season. The surrounding area may be leased for hunting.
Kennealy, of Tomb N’ Groom Crew, LLC, has a focus on job training for individuals to work in cemeteries.
He brings experience from working in other cemeteries including a recent project in Decatur, Georgia, Michael Brown brought a friend, Kelsey Bush, who is a student at Auburn University at Montgomery. She has photographed an estimated 3,000 graves in Elmore, Macon and Tallapoosa Counties. Bush explained that after taking photos of some graves, she returned to visit them only to find that they had been damaged. She documents that, too.
The Lee County Cemetery Preservation Commission has taken steps to address vandalism and restitution in Lee County. Needless destruction of the final resting places of our pioneers will not be tolerated. Sheriff Jay Jones and his department earned a proven record of apprehension of vandals. Lee County District Attorney, Brandon Hughes, has committed to full prosecution of vandals including requesting restitution. We will also be requesting full restitution when this happens, and Lee County Courts have a history of awarding restitution in these types of cases.
Vandals should seriously think about the consequences of their misdeeds before they face the heavy costs of restitution when convicted.