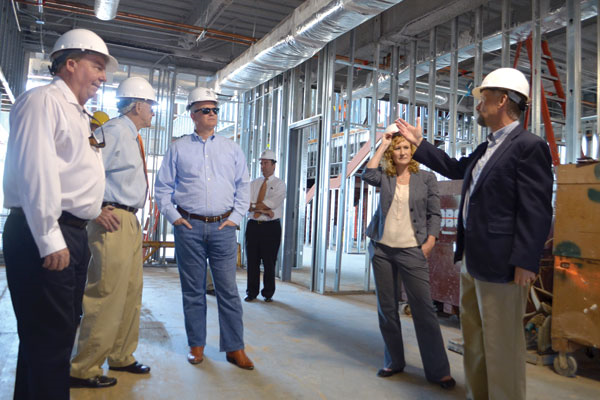 The new additions to the Lee County Justice Center are starting to take form on Gateway Drive in Opelika.

Recently local politicians, the circuit clerk, the DA and an architect took a tour of the construction site that is projected to be an $8.7 million dollar job.

“The bid for the actual construction was $7.6 million,” said County Administrator Roger Rendleman. “By the time you consider engineering, architecture, (and etc.) it is basically another million, so when it is all said and done we are talking about an $8.6 million project.”

Recent rain had slowed the pace of the job so the additions should be completed by some time in November with employees transitioning to the new offices in January, but those are not hard dates, according to Rendleman.

Additional court fees were utilized to fund this 48,000 square-foot project after the issue was voted in favor of by the citizens of Lee County in 2008.

The new building will connect to the existing side of the justice center and house Mary Roberson along with the circuit clerk’s office, District Attorney Robbie Treese and his offices complete with a new grand jury room, some much needed storage space for records plus an additional court room that is twice the size of any current courtrooms in the Lee County Justice Center.

“(Space) is not going to be a problem (because) I will now have space for prosecutors, investigators and support staff,” Treese said. “This space will help future generations, district attorneys and judges to be able to grow as the county grows and adapt to our ever-changing caseload and environment; so it’s really smart space.

“We (currently) have files from the 1970s (and further back) scattered in four different buildings all over the city and hopefully I can get these files scanned in and consolidated all in one space (with the help of interns of course).”