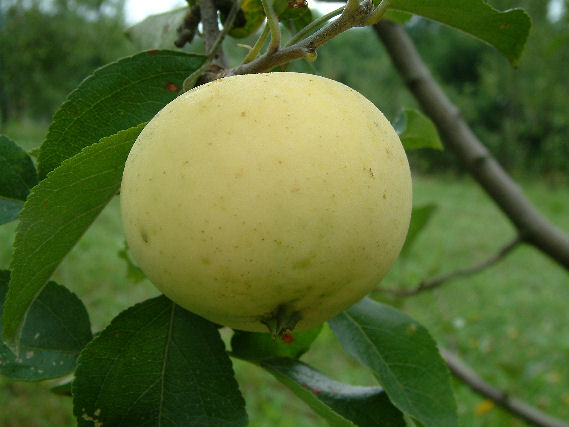 By Bob Sanders
They’re special to us. Who knows what kind of apples they are — they’re probably a mixture of many kinds that came together in the seedling that sprouted long, long ago in the poor, rocky soil of the old home place and managed to survive.
We called apples from this particular tree just “June apples.” They were always different, with a sharp, crisp taste. As they matured, their greenness would be touched first with a dab a rouge on the cheek facing the sun, that, if they lasted long enough, would become a striped redness all over. The apples would never get pithy, but right to the end would be juicy enough for a bite to cause a squirt.
We ate the apples green and in various stages of ripeness direct from the tree, or from the ground under it. And we’d pick them up for drying. Mother would tediously peel and slice the knotty little things and spread them on sheets of roofing tin in the sunshine, overlaying them with a few twigs of Chinaberry that were supposed to discourage the flies. The slices would dry and curl and turn brown and take on a leathery texture. But they’d keep. And they’d return to u on cold wintery days in the form of hot fried apple pies.
The old tree stood down past the barn in what we called, very originally, the orchard. I can remember when it became “the orchard.” Daddy sent off to Stark or someplace and got some legitimate varieties of apples that we set out in orderly rows, with the old June being in the center. A few of the new trees survived, but the old June outlasted most of them.
The tree was persistent, but age began to tell. I don’t know how long it had been there — since Daddy was a boy, at least. It was, from the time I can remember, gnarled and ancient looking, its bark systematically shot-patterned by sapsucker holes. It leaned to the north, with one big limb sticking out in that direction. That was the limb that, more than once, raked me off the mule. I’d be riding old Bill back to the ridge field to plow the corn or cotton there, and I’d go under that limb to stuff an overalls pocket full of apples. Bill wouldn’t stop at the exact moment I said “Whoa!” and there I’d go, right over his hind end.
I loved that tree. Aunt Lessie’s young’uns loved it too. Banks and Polly and Willadine and Wynell would come down with the same mysterious ailment that sometimes affected me during a certain time of the year. Doctors would solemnly pronounce the arrival of some new virus. Shucks, we knew what it was. Too many green apples.
The tree commenced to fade about the time I left home to go to college. First one limb and then another began to die back. But still the few remaining twigs would be covered with fruit each year. By the time I got married and we set up housekeeping in a place of our own, it was almost totally gone.
I dug up a sprout from it, brought it across the state and planted it in our back yard. It is not an ideal place, but, in spite of competition from the surrounding oaks and sweetgums and something unknown to the original, fire blight, it has survived, and regularly produces qa goodly number of those same tart, crisp  little apples.
The kids in the neighborhood ignore them except occasionally, as ammunition for throwing. With those beautiful delicious apples available at the nearby supermarket, who’d want to eat those scrawny things?
After the old tree back home finally died, my dad got a sprout from MY tree and set it out back there, and it has now reached the bearing stage. So the line continues, just a small, tart, striped apple, but a special one to me.