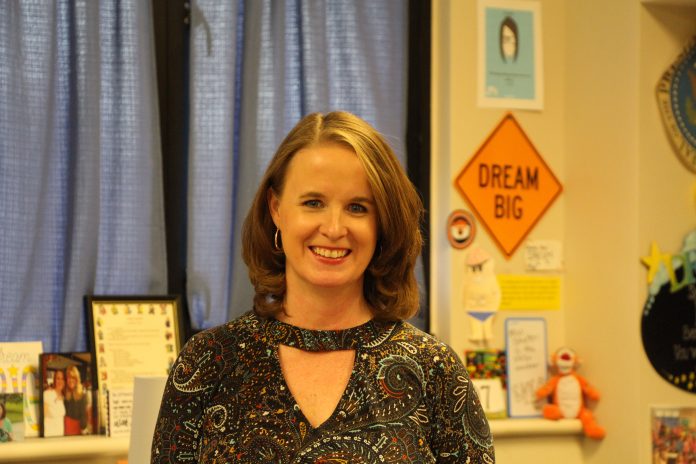 The Jewish Foundation for the Righteous (JFR) presented the Robert I. Goldman Award for Excellence in Holocaust Education to Patricia Skelton, sixth-grade language arts and history teacher at Opelika Middle School, at its annual benefit on Nov. 25 at The New York Public Library in Manhattan.
The JFR selected Skelton as the recipient of the 2019 Goldman Award because of her outstanding commitment to teaching the Holocaust in her school.
“We are privileged to honor such exceptional educators each year, and especially proud to present this year’s award to Patricia for her outstanding work in teaching the Holocaust within her school,” said JFR Executive Vice President Stanlee Stahl.
Skelton’s continued involvement in JFR programming has been made possible by the Birmingham (Alabama) Holocaust Education Center. She first attended the JFR’s Summer Institute in 2017 and has since participated in the organization’s European and Advanced Seminars. The three programs are intensive academic seminars for middle and high school teachers whose curriculum includes or focuses on teaching about the holocaust. Over the years, Skelton has used what she learned from the JFR to focus her lessons on creating a better understanding of the Holocaust so that her students become more tolerant and empathetic towards others.
Skelton has been teaching for 24 years, the last eight of which has been at Opelika Middle School. She resides in Auburn.
Goldman, for whom the award is named, was one of the founding trustees of the JFR. A beloved and respected leader of the organization, Goldman was its vice chair and led its education committee until his death in 1998. In tribute to his commitment to Holocaust education, particularly to teaching about rescue, the JFR established the award in his memory.
The JFR continues its work of providing monthly financial assistance to more than 265 aged and needy Righteous Gentiles, living in 18 countries. Since its founding, the JFR has provided more than $40 million to aged and needy rescuers – helping to repay a debt of gratitude on behalf of the Jewish people to these noble men and women. Its Holocaust teacher education program has become a standard for teaching the history of the Holocaust and educating teachers and students about the significance of the Righteous as moral and ethical exemplars. For more information, visit www.jfr.org/.