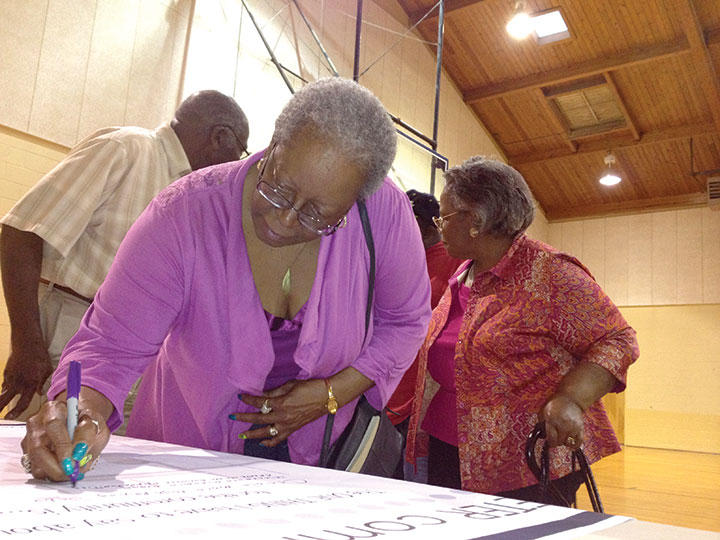 “If there’s anything that’s going to help our community, I want to be a part of it.”

That was the sentiment of Delia Parhan and likely many others from the Jeter and Carver communities who attended a community workshop last Thursday at the Covington Recreation Center.

The open meeting and forum, hosted by Market+Main – a city-planning firm out of Atlanta – in conjunction with the city of Opelika, invited community members to share their thoughts about Jeter and Carver – the good and the bad.

“It’s easy to look around and see that Opelika is a great city,” said Opelika Chamber of Commerce Chairman Jimmy Wright, by way of opening. “Last August Envision Opelika began a process of looking at things in the city  … One of the suggestions that was most prevalent was to do some work on our neighborhoods.”

Aaron Fortner with M+M, introduced the evening activities to those in attendance, more than 100.

“When we start out our planning process, we don’t know as much about the community as you do,” Fortner said, holding the attention of the crowd. Attendees nodded and took notes as he explained the evening’s goals. “You’re the local experts, so we want to hear from you. We came to hear what you have to say.”

Lines of tables flanked the gymnasium at Covington, and citizens were encouraged to visit each table, along with the maps on the walls, to offer their input on different aspects of their communities. Tables featured large printouts with questions and room for responses – prompts like “The thing I love most about the Carver community is” and “The one thing I want to say about Jeter recreation is.”

Citizens milled around the gym for the next hour, offering their feedback and talking with M+M representatives.

“I live and own properties in these areas, so I want to make sure my input is heard,” said Raven Harvis. “I think these communities have a lot of raw potential that can be tapped into if there is a little TLC put into each of them.”

Harvis, who moved to the area from Mobile nine years ago, said she thinks this city planning initiative will benefit the communities “as long as they continue to have momentum behind it.

“As long as people who have the power to make these changes continue to back this, I think it will be very successful,” Harvis said.

With comments ranging from suggestions for art programs, historical tours and transit systems to complaints against derelict homes and unsafe playgrounds, Fortner said he thought there was “lots of good conversation.” But neither he, nor city council members, were surprised by the issues broached by the community.

“These are things I expected to hear,” said Councilwoman Patsy Jones, who said she remembers being involved in community improvement in these same areas in 1995. “Now we’re excited again about still moving the city forward and making these two neighborhoods better.”

Fortner said a steering committee of ten community members will meet about every three weeks to refine problems and solutions to be presented in another open meeting in August.

“After that, we’ll be able to finalize it into a plan,” Fortner said.

That plan could be implemented over the course of one to five years, prioritizing more immediate needs.

Councilman Larry Gray said he was pleased with the turnout.

“We’re going in a good direction, and I want to see this thing come through,” Gray said. “We have a lot of people behind us, and I almost think we can’t fail. Hopefully we can get some new ideas to solve our old problems.”