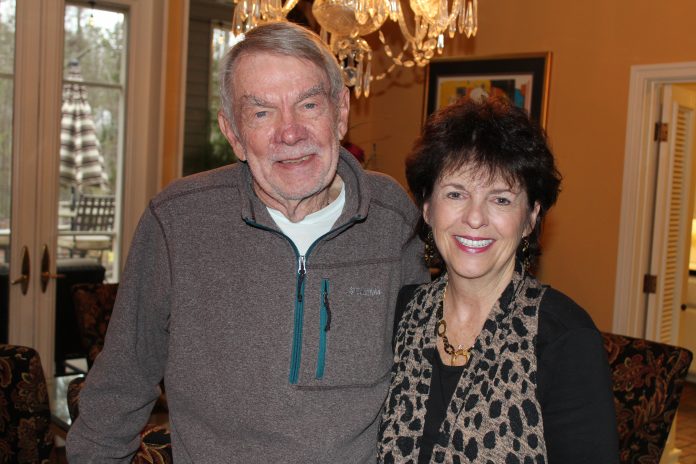 When Pam Hope’s father, Jerry Hart, visits, it is a special time with plenty of superb meals. Jerry enjoys preparing his signature dishes for Pam and her husband Jim at their home on Arrowhead in Opelika. The family gathers around the dining room table to savor his braised Lamb Shanks and roasted Cornish Hens that fill the house with amazing aromas.
Jerry visits the Hopes three times a year. He drove down from his home in Minneapolis, Minn. Jerry has seven children, 28 grandchildren and 10 great-grandchildren, with the majority of the family in Minneapolis.
When he travels to Opelika to visit Pam and Jim, he also enjoys time with grandchildren Heather Weston, Chad Hope, Heather Glaze and Justin Halley, along with five of his great grandkids.
The family chef grew up in Peoria, Ill. After high school, he graduated from Bradley University in mechanical engineering. Over his career, he worked as an engineer and in sales, including international sales, for the Caterpillar Tractor Co., New York Air Brake Co., Sundstrand Corp., Aspro Corp., Parker Hannifin Corp. and Eaton Corp.
Jerry’s work took him to countries around the world, including Europe, Germany, Australia, South America, South Africa, Russia, and many others. While it is difficult to say which places were his favorite, he especially liked London, Rome and Paris and thought New Zealand and Australia were interesting.
He enjoyed his job and didn’t want to retire. Since retiring, he is cooking more.
Jerry’s wife Vernice, Pam’s step-mother, was an excellent cook and had worked at a restaurant. She and Jerry cooked together, and he learned from cooking with her. They enjoyed entertaining and would have 50 to 60 people at a Christmas or New Year’s party.
After Vernice passed away, he began cooking the meals. He enjoys cooking Cornish hens, chicken and turkey. When roasting a large chicken or turkey, he will make bread stuffing. He cooks poultry in the oven on low temperature until tender.
While he doesn’t use a thermometer because he can tell from experience when it is done, novice cooks can use a thermometer to assure the poultry is cooked to the correct internal temperature.
For the Cornish Hens recipe, he puts a quarter stick of butter in the cavity of the hens, which he has rinsed well, to enhance the drippings. For making gravy, he combines flour and cold water in a jar, shaking it until blended. Then, he slowly pours it into the drippings, stirring, and brings it to a boil to thicken. He prefers a thinner gravy, so he doesn’t use a lot of flour.
For side dishes with the Cornish Hens, he uses a ricer on cooked potatoes, which he feels is easier than mashing them. For a vegetable, he steams frozen Green Giant vegetables to complete the menu.
While he also enjoys making Lamb Shanks, he didn’t have a recipe, so Pam wrote down the ingredients. He also cooks the lamb on 280 degrees in the oven until very tender. He is generous with seasonings to flavor the lamb.
He uses the au jus from the lamb for a sauce. The house smells wonderful while it is baking. Pam generally does not like lamb, but she does enjoy her Dad’s lamb with all the seasonings.
Pam and Jim have relished having Jerry visit to cook elegant meals. They sat in the dining room to savor the meals and lingered to enjoy the time. Pam shared photos of the scrumptious meals on Facebook.
When Pam was a student at Auburn University, her father and mother lived in Germany for two years. She spent two summers with them and traveled to 13 countries. “We drove everywhere,” Pam remembers. “He would do his business work, and then we would travel. I got to experience the cuisine of all those countries. I was always trying something different.”

Pam says her father always taught her to try any dish. “The reason I enjoy cooking so much,” she says, “is with Dad traveling so much he would come back with ideas for cooking. He taught me to try everything. You may not like it, but at least you tried it.
“That was an important lesson I learned about cooking,” she adds. “To try new foods. You might like it”.
Jerry also makes a dish he calls “Breakfast Trash” with leftover steak to serve for brunch with his specialty Bloody Mary. He says the secret to a good Bloody Mary is to coat the rim of the glass. He dips the rim in lemon juice and then into a mixture of lemon pepper and celery salt. He garnishes the drink with a stick of celery.
When Jerry visits family, he packs lemon pepper, garlic, salt and pepper that he prefers to use in cooking in his suitcase. The family looks forward to his visits and family time.
Pam, who is from Peoria, Ill., came to this area after high school when her boyfriend was recruited as a football player for Auburn University, She decided to attend Auburn as well. While the relationship didn’t last, Pam’s love of the area did. After graduating from Auburn, she worked at Craftmaster Printers for 19 years and other businesses and was co-owner of Southern Crossing for several years.
While Pam also enjoys cooking, she especially likes to prepare hors d’oeuvres for causal entertaining. A favorite is the flatbread pizzas prepared with rotisserie chicken and barbecue sauce.

She relies on dishes she can prepare ahead for entertaining. “I like to cook dishes that I can prepare ahead that can be popped into the oven so I can mingle with my family and friends while they are here.” She enjoys casual, spur of the moment hospitality.
Pam will place food on the kitchen counter with a stack of wooden trays; people help themselves and sit where they like.
“We like entertaining where people can come as they are and feel comfortable. I want my home to feel inviting. I think that describes our lifestyle.” In the spring, they can open the French doors in the kitchen and dining room, and guests can relax on the patio.
“I have always found that cooking is therapy,” says Pam. “I love being in the kitchen. If I am in a bad mood, I can pull out a recipe, start cooking, and in no time I am happy.”
When Jerry leaves Opelika, he is driving to Destin to visit friends. Then he will take three days to drive to San Diego, Calif., to visit his son, Jay and his family, and prepare his special dishes for them. Jerry will visit Palm Desert where they have a time share before making the long drive back home to Minnesota.
Pam, Jim, their children and grandchildren are already looking forward to Jerry’s next visit in April.
Jerry’s Lamb Shanks
4 lamb shanks
1 can beef broth
½-1 cup red wine
1 onion, cut in half
2 potatoes, peeled and cut into chunks
2 carrots, sliced
Whole mushrooms
1 clove garlic, sliced
flour
Lemon juice
Olive oil
Garlic powder
Lemon pepper
Basil
Oregano
Italian seasoning
Bay leaves
Salt
Pepper
Preheat oven to 280 degrees.
Mix a small amount of garlic powder, salt and pepper into flour.
Dredge shanks in flour mixture until well coated.
In a deep, oven proof pan, brown shanks in a small amount of olive oil; leave in pan.
Add beef broth and red wine.
Sprinkle generously with garlic powder, lemon pepper, basil, oregano, Italian seasoning, salt, and pepper.
Add lemon juice, bay leaf, and mushrooms.
Cook in oven 1 hour at 280 degrees.
After 1 hour, add carrots, potatoes, sliced garlic and onion (sliced in half).
Continue cooking until meat pulls from bone, and vegetables are tender (1-2 hours longer).
Remove from oven. Remove bay leaves and serve.

Jerry’s Cornish Game Hens
Thaw and clean the hens. Remove glands in the upper, inside rib cage.
Place the hens in a deep pot, breast side up.
Rub with olive oil.
Lightly apply garlic powder.
Apply lemon pepper. Salt and pepper to your taste.
Put about a quarter stick of butter in the cavity.
Bake at 280 to 290 degrees for about two hours or until the legs pull.
Make gravy with the drippings. Cut hens in half and serve with rice potatoes.
Gravy:
Combine small amount of flour and cold water in a jar, shaking it until blended. Then, slowly pour it into the drippings, stirring, and bring to a boil to thicken.

Jerry’s Wild Duck
Preheat oven to 280 degrees.
Put breast side up in oven-proof pan.
Sprinkle with garlic powder, salt, and pepper.
Put ½ stick of butter in cavity, and drizzle with a bit of brandy.
Put pan in preheated oven, and roast until meat pulls from bone.
While roasting, baste with butter/brandy sauce often.

Pam’s Roast Beef Rolls
½ cup finely chopped walnuts, toasted
2 pkgs. party dinner rolls
2/3 cup peach preserves
½ cup mustard/mayo blend (Dijonnaise)
¾ lb. deli roast beef, chopped
½ lb. thinly sliced Havarti cheese (I shredded mine)
Slice party rolls in half, horizontally. (Do not separate rolls.)
Spread top half of rolls with preserves, and sprinkle with walnuts. Spread bottom half of rolls with mustard/mayo blend.
Top bottom half with roast beef and cheese. Cover with top half. Cover with foil.
Can freeze at this point. To heat, let thaw overnight in refrigerator. If cooking immediately, cook at 325 degrees for 25 to 30 minutes.
Let sit for a few minutes before cutting into individual rolls.

Pam’s French Toast Bake
1 loaf sourdough bread
8 eggs
2 cups milk
½ cup heavy cream
¾ cup sugar
2 Tbsp. vanilla
Topping:
½ cup flour
½ cup brown sugar
1 tsp. cinnamon
¼ tsp. salt
½ cup butter cold, cut into pieces
Cut loaf into cubes and evenly in a greased 9 x 13 pan.
In a bowl, mix together eggs, milk, heavy cream, sugar and vanilla. Pour evenly over bread.
Cover pan with Saran wrap and refrigerate overnight.
Mix together flour, brown sugar, cinnamon and salt in a medium bowl.
Cut in butter with this mixture until crumbly and place in a zip lock bag and refrigerate overnight.
Take pan and topping mixture out when ready to bake. Sprinkle crumbly mixture evenly over the bread.
Bake at 350 for 45 minutes to 1 hour, depending on how soft you like it.
Cut into squares and serve with maple syrup or fresh blueberries.

Pam’s Red Velvet Truffles
1 box red velvet cake mix (plus ingredients listed on box to prepare cake)
8 oz. cream cheese, softened
16 oz. white chocolate
2 oz. semi-sweet or dark chocolate
Prepare 9 x 13 inch cake according to package instructions. Let it cool completely in pan, then crumble the cake in a large bowl.
Add softened cream cheese and knead gently with your fingers until cream cheese is fully incorporated.
Roll about 1 heaping tablespoon of the mixture into balls and place on a baking sheet lined with parchment paper. You will get about 35-40 balls. Set in the fridge to chill.
Melt white chocolate, remove cake balls from refrigerator, and using a fork, dip them into melted chocolate. Place one ball at a time into the melted chocolate, roll the ball to coat evenly with the chocolate, then slightly tap the fork against the side of the bowl to trim the excess chocolate. Place the truffle on the parchment paper. Set them back in the refrigerator until chocolate is firm.
Melt dark chocolate, transfer into a small bag, cut the corner off and pipe melted chocolate on top of the truffles.
Store truffles in the refrigerator.