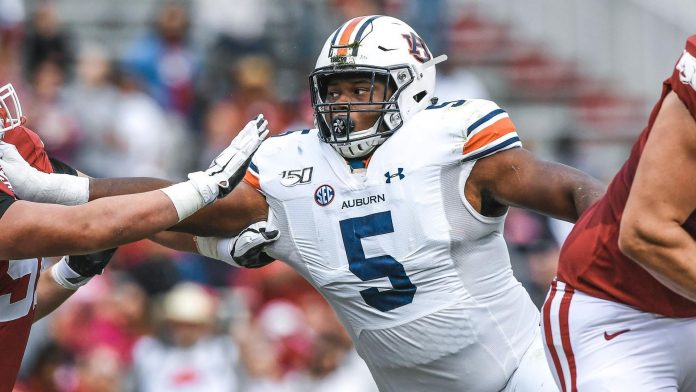 The semifinalists for the third annual Jason Witten Collegiate Man of the Year were announced last week, a group that includes 20 of the nation’s top leaders in college football, including Auburn’s Derrick Brown.
Compiled by a subset of the Jason Witten Collegiate Man of the Year Selection Committee, the semifinalists have all demonstrated a record of leadership by exhibiting exceptional courage, integrity and sportsmanship both on and off the field.
Seventeen seniors and three juniors make up the list. Among conferences, the ACC, Big 12 and SEC led the way with four selections each, while the Big Ten had three. The Pac-12 and American Athletic Conference each had two and the Mountain West also had one semifinalist.
Three finalists will be named for the award on Dec. 16. The winner will be announced at the award ceremony on Feb. 18, 2020 at The Star in Frisco, Texas.
Last year, Wisconsin’s D’Cota Dixon won the award. The inaugural Jason Witten Collegiate Man of the Year was presented to Shaquem Griffin of UCF in 2017.
The award, presented by Albertsons and Tom Thumb, is the first college football honor to focus primarily on a player’s leadership, both on and off the field. Leadership is a term synonymous with Jason Witten, who, in addition to becoming one of the best tight ends in the history of the sport and the Cowboys’ all-time leading receiver, has served as one of football’s most prominent role models during his 16-year pro career. In addition to winning the Walter Payton NFL Man of the Year Award in 2012, Witten also received the Bart Starr Award, Pro Football Weekly’s Humanitarian of the Year Award, Home Depot NFL Neighborhood MVP and the Bob Lilly Award, among many others. All of those honors have recognized his work in the community, achievements on the field and dedication to his teammates and family.
“It’s my honor to announce this impressive group of student-athletes as semifinalists for the third annual Collegiate Man of the Year,” Witten said. “All of these young men are shining examples of what makes college football great. They have demonstrated exceptional character and leadership, often while overcoming large challenges. They are great representatives for the game of football, and I commend all nominees for getting to this point.”
The winner of the Jason Witten Collegiate Man of the Year will also receive a $10,000 contribution in his name to his school’s athletic scholarship fund. The contribution will be made by Jason Witten’s SCORE Foundation, the official charity of Jason and his wife Michelle. The SCORE Foundation, founded in 2007, has positively impacted tens of thousands of children and families in Texas and Tennessee during the last 12 years. The foundation operates its nationally-recognized SCOREkeepers program, which places trained male mentors on staff to work with children at family violence shelters, at nine shelters in the two states.
Derrick Brown, Auburn (Sr., Defensive Lineman)
One of the nation’s top defensive players, Brown was a finalist for last year’s Man of the Year award. He is a not only a force on the field, but an incredible leader off the field as well. He is a member of the SEC Academic Honor Roll and a member of the SEC Student- Athlete Leadership Council for football. He serves as Auburn SAAC vice-president and has done Christian-based mission work in the Dominican Republic and also spent time building homes in Montgomery and Auburn with his church. Brown has been heavily involved with other community projects like Angel Trees, Toys for Tots, campus Student-Athlete Day, the Beat Bama food drive, Halloween Trunk or Treat and SAAC clothing drive.