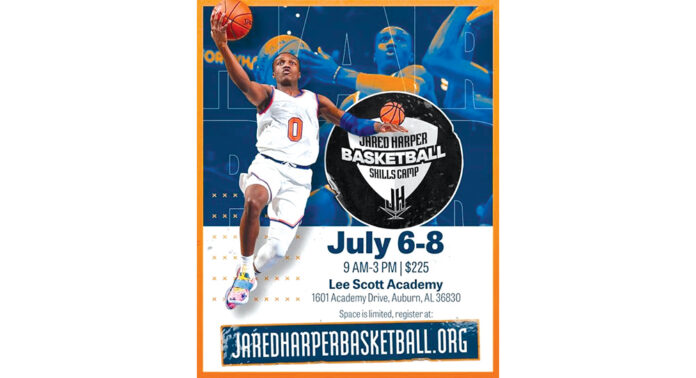 By Maddie Joiner
For the Opelika Observer

Former Auburn guard Jared Harper is returning to The Plains this summer to host the inaugural Jared Harper Basketball Skills Camp. Camp will be at Lee-Scott Academy July 6-8 from 9 a.m. to 3 p.m. Registration costs $225.

Boys and girls ages 8-16 can attend Harper’s program, regardless of their basketball skill level.

Camp will sharpen players’ fundamental skills and better their skills at the wing, guard or post position.

The official website says, “Jared and the coaching staff will offer tips and hands-on instruction, including lectures, fundamental basketball skills stations, contests and scrimmage games in a high-energy, fun and positive environment.”

“I went to his camp a couple years ago just when I was working out with him and being able to be there and see him involved in the camp and all the things he was doing, even himself helping the kids was great so it was definitely something I wanted to even do myself,” said Harper.

Harper chose Auburn for the location of his camp because he sees the city as home.

“The city of Auburn has always been special to me,” Harper said. “Going to Auburn, I knew the first time being there that I could see that as being home. I’m so thankful for all the support that I’ve gotten over the course of being at Auburn and events after from the whole Auburn community.”

Harper’s former mentor Chad Prewett used to coach at Lee-Scott and got Harper connected with the school.

Camp will be led by Harper with the help of assistants and hopefully former Auburn players. Harper’s former Tiger teammate Bryce Brown is set to come speak to campers and assist with camp.

Harper is excited for his first-ever basketball camp. He says he looks forward to giving young athletes advice to help in the long run.

He also hopes the Jared Harper Basketball Skills Camp is something he can start doing every summer in Auburn.

For more information or to register for camp, visit www.jaredharperbasketball.org/.