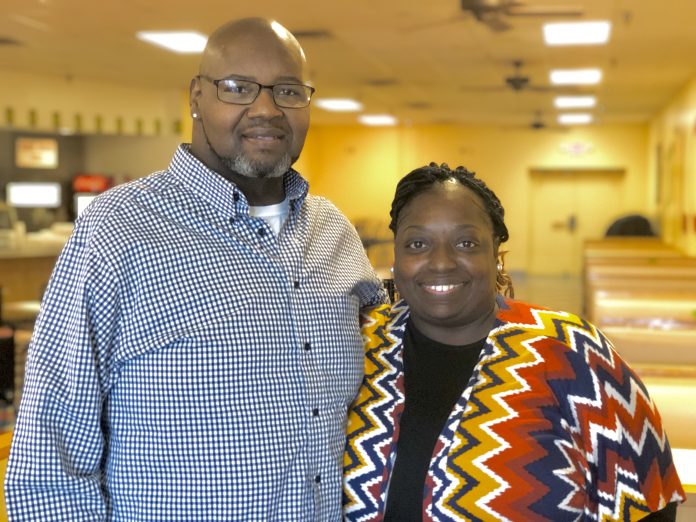 Jahvon’s – A Little Taste of Heaven Restaurant will have a new home at USA Town Center, with a grand-opening date slated for Dec. 1. It will replace Homegirl’s Jamaican Grill, which is set to close on Nov. 27.
Previously located within the Pepperell Corners Shopping Center, Jahvon’s owners Tyrone and Montesha Durrell said they are excited to re-open their business in the shopping center.
“We’re ecstatic. For me, I’m ready to get back to it and do what I love doing,” Montesha said. “We want our customers to know though that even being in a new location, it’s the same old Jahvon’s. Everything is still there and they’ll know the food.”
Both Tyrone and Montesha are Lee County natives. While Tyrone handles Jahvon’s advertising and promotion, Montesha, her mother and cousin focus on cooking and serving their customers.
Montesha’s love and passion for good, down-home cooking can be traced back to her four summers working at the now-defunct Whispering Oaks Restaurant on Geneva Street, working closely alongside a seasoned, older cook she called “Ms. Eva Mae.”
“I held a number of different roles at (Whispering Oaks), but the majority of the time, I was back there in the kitchen. And often, Ms. Eva Mae would be back there working and ask me to help,” Montesha said. “She’d say ‘hand me this’ or ‘hand me that’ and I learned how to do certain things and develop a love for cooking.”
That love of cooking has carried with Montesha into her adult life. Whether it was preparing food for church gatherings, family reunions or work parties, she said her food was always warmly received.
In 2014, the Durrells’ 13-month-old son and restaurant namesake Jahvon passed away following a battle with myocarditis, a virus that can “affect your heart muscle and your heart’s electrical system, reducing your heart’s ability to pump and causing rapid or abnormal heart rhythms,” according to medical reports.
Jahvon’s passing, paired with her longtime dream of owning and operating her own restaurant or food-oriented business, pushed Montesha to pursue her dream.
“Sometimes we’ll have things that happen to us that push us into our destiny. When (Jahvon) passed, I wanted to open something in his name, and I wanted it to be something that I loved to do and could put my all into, and ultimately led me to doing this,” Montesha said.
Loyal patrons have buoyed the business during the years of Jahvon’s existence. During the restaurant’s hiatus, customers have been flooding Montesha’s inbox and the restaurant’s social media page with orders for meals or catering events, which gives the Durrells confidence moving forward.
“The restaurant would be nothing without (our customers). They never stopped asking if and when we’d reopen, and some people were even sending me possible locations and vacant buildings they thought we might be interested in,” Montesha said. “All of that support means a lot to us.”
As previously mentioned, Jahvon’s menu will remain the same. There will be rotating daily specials, and Montesha said customers can expect items like barbecue quarters, collard greens, macaroni-and-cheese, oxtails and sweet potato casserole to remain a prominent part of the Jahvon’s menu.
Jahvon’s planned hours of operation will be 10:30 a.m. to 3 p.m. Monday through Friday and 10:30 a.m. to 5 p.m. on Sunday. It will be closed each Saturday.
For more information, like and follow the restaurant’s Facebook page. It will occupy Suite 220 of USA Town Center, which is located at 1220 Fox Run Ave.