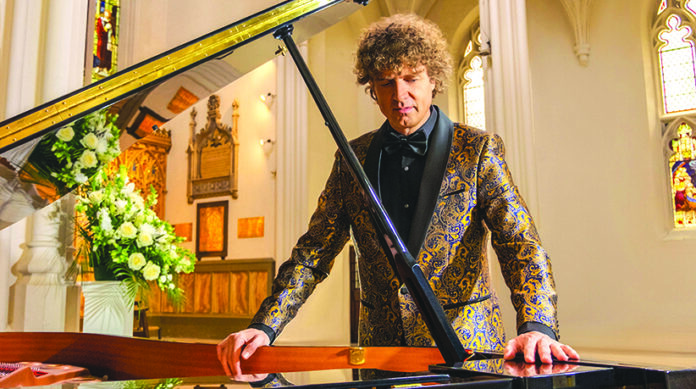 BY ANN CIPPERLY FOR THE OBSERVER

Internationally renowned Dutch pianist and composer Ian (Jan) Mulder will be the guest artist with the Festival Orchestra for the Music Ministry Gala on Oct. 11 at 7 p.m. in the sanctuary at the Auburn United Methodist Church. Following the Gala benefit concert, a celebratory reception will be held in the Mathison Lobby.

His award-winning inspirational “Love Divine” CD series has been the bestseller instrumental at Amazon. Mulder recently composed and recorded a 12-part orchestral work, based on the hymn “Crown Him with Many Crowns.”

Born into a Dutch family of pastors and musicians, Mulder attended church services with his family. His grandfathers were both pastors at large Dutch Reformed churches. His uncle was one of the Netherlands’ most famous organists, conductors and composers of his day. Mulder studied piano, organ and composition at the Rotterdam conservatory. He moved to the United States in 2007.

The award-winning pianist said he sees his talent as a gift from God. He recorded more than 200 albums in the first decade of his career. Most of these were with orchestras. Mulder composes Christian music that is a mix of traditional and contemporary well-known hymns. His classics include “Amazing Grace” and “How Great Thou Art.”

“We are thrilled to welcome the internationally renowned Dutch pianist and composer, Jan Mulder, as our guest artist for the Music Ministry Gala,” said Gary Klarenbeek, director of music at the church. “He is an extraordinary talent.

“There is no charge for the performance, but a reservation is required. During the performance we will also announce the upcoming Christmas Season musical performances provided as a gift to the community. It’s a stellar lineup this year.”

To make a reservation for the Gala Benefit Concert, email Klarenbeek at GaryK@aumc.net.