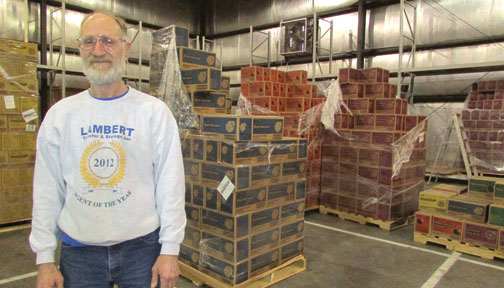 As a truck owner/operator contracting with Lambert Transfer and Storage, Dwight Moore is on the road a lot. He has been throughout the 48 states as part of a career that began at age 15. When he’s not on the road, he said he likes to help around the warehouse – especially this time of year: Girl Scout cookie season.
“Every year when it starts, I do the Montgomery drive-thru – for two days I park outside of Montgomery,” Moore said.  “Troops come by, and we give them what they’re supposed to have.” He also delivers all over the region. “I just enjoy it. I like helping the girls – of course I get paid some for it, but I just enjoy it.”
Moore’s father was employed by Lambert, and for Moore, joining the team was just a natural fit. It’s something he’s done for most of his life.
“I’ve tried some other things, but I’ve always come back,” he said. “I worked in mobile homes for a little while – setting up mobile homes and doing repairs and maintenance. I tried hauling cars for a while – I did that for a little bit, about six months. I came back. I’m still in the moving business.”
Moore, 63, grew up on Wire Road outside of Auburn. Now of Salem, he has worked under numerous bosses in his time at Lambert Transfer – T.M. Lambert, Dorris (Lambert) and Carlton Hunley Jr., and now Carlton E. Hunley III. “I’ve been here longer than any of them,” Moore said. “This is what I guess I was meant to do. So I’m still here.”
In Girl Scout cookie season, Moore’s work ethic is in high demand – that’s according to David Tice, who brought the Girl Scout contract when he came to Lambert, and Hunley Jr.
“This time of year, he doesn’t want to go out of town. He wants to come and distribute Girl Scout cookies,” Hunley Jr., said. “He likes to be the one that handles the cookies.”
“They request him,” added Tice. “Christine Shavers (who handles the cookies in Montgomery) has grown so attached to him and his crews, they change schedules with deliveries to make certain it works with his schedule.”
“I think if we told him, ‘Well, we can’t pay you this year,’ he’d say, ‘Well, I’ll go ahead and do it,’” Hunley Jr. said. “And if we said, ‘We need a little extra money – can you pay us to do it?’ he’d probably say, ‘Well … how much? Don’t get greedy.’ I just think the world of Dwight because he has taken it on as something personal.”
For Moore, helping the Girl Scouts fits in with his life view on hard work.
“It’s teaching them what it takes to make things go in this world – you’ve got to get out here and work,” Moore said. “And they’re doing good this year. They’ve been moving some cookies. I’m proud of them.”
Moore said he tries to say within about 1,000 miles of home now that he has “matured” and his wife no longer hits the road with him. When he’s not traveling, he’s still working.
“I love to do construction and gardening,” Moore said. “I do carpentry, electrical, heat and air – I do it all. I grew up on a farm, and my granddaddy told me, ‘Learn to do some of all of it, and you’ll always have a job.’”
It’s the words of his grandfather that keep him working.
“That’s my fun. That’s what I enjoy doing,” he said. “It’s just the way I was raised … My grandfather told me – I went to visit him one day, and he was just wringing wet. I asked him, ‘Why are you doing this? You own your place. It’s just you and Grandmomma.’ And he said, ‘If you ever quit working, you’ll die.’ And he was pretty much right. I know people who have quit – retired, quit working – and they usually live three or four years, and then they’re gone. The body requires you to move, to do things. As long as you do that, your body holds together.”
So even though he might one day retire from the road, he said he’ll still keep doing cookie distribution, and he’ll still keep busy.
“I won’t ever quit working,” he said. “I’ll be working. I can’t quit.”