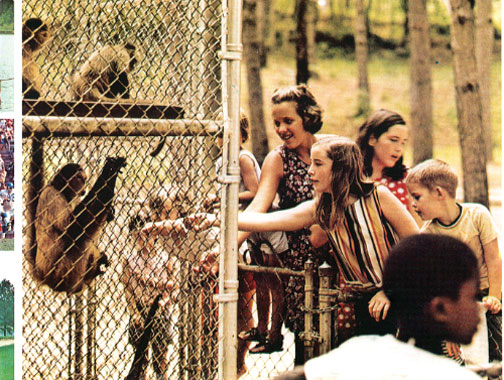 Every great city in the world has that one special landmark; a spot so unique and iconic, that it’s immediately recognizable. Paris has the Eiffel Tower. London has Big Ben. Rome has the Colosseum.
And Opelika? Opelika has the Monkey Park. That’s not actually its name. The wooden sign at the entrance to the park reads Opelika Municipal Park. But only Yankees and visitors call it that. Yankees – God bless ‘em.
Like a lot of Opelika natives, I spent many childhood Saturdays playing in the park. It was the early 70’s, and things moved a bit slower. There was no social media to record everyday activities. But I can picture those days just as clearly as I can see the paper I’m writing this on.
The park sat in a valley surrounded by trees. There was a meandering creek that ran like a border from one end of the park to the other, separating it from the rest of Opelika. A train track circled the perimeter of the park, and the shiny red Rocky Brook Rocket rode that track every few minutes. There was a train depot/concession stand where I lined up with other kids fortunate enough to be in Opelika on a hot summer Saturday to buy Everlasting Gobstoppers, a Coca Cola ICEE, and tickets to ride the Rocket. And in the center of it all were huge metal swings
– the kind where you could sit on the wide rubber seat and pump your legs hard enough to make the poles leave the ground while your toes touched the stretched-out sky. Gleaming metal slides, hot enough to scorch the skin off the back of your legs; animal-shaped concrete climbing structures, squatting like prehistoric fossils in the wilting grass; and a squeaking, spinning, red metal contraption dedicated to producing the feeling you were flying as you lay looking up at the clouds (and a profound regret over the gobstoppers and the ICEE) were placed up and down the bank of the creek.
The real attraction, though….the piece de resistance….was the 18 x 8 foot cage in the middle of the park that was home to several spider monkeys. There were as many as a dozen living there at any given time. Adult monkeys, and the occasional baby or two, swung from bar to branch.
They ate peanuts we tossed into the enclosure. They slept. They chattered. And they watched – each other and all of us.
I was absolutely enchanted. The truest desire of my heart throughout most of that decade was to own a monkey of my own. She would be a girl with a frilly purple dress and shiny black shoes. She would wear lacy underwear and carry a purse to match her shoes. We would speak to each other in a language only we understood. And she would be mine forever.
The closest I ever got to that dream was to stand and watch the monkeys, maybe throw the occasional peanut. I imagined that they looked at me with the same longing and affection I had for them. Oh, young Wendy – God bless you.
One particularly hot summer Saturday, I had two quarters that were burning a hole in my pocket, so my dad drove me and some of the other kids from our neighborhood down to the park. I went straight to the concession stand and bought one perfect piece of bubble game, and then I headed for the monkey cage.
There was a crowd already gathered. A new baby monkey was the center of attention, but I noticed one lonely-looking, older monkey sitting above the rest of them. I’d seen him before and given him the name Joe. He was watching the other monkeys, slowly chewing a peanut. To my eyes, he looked wise but sad. I wanted to reach out and hold him….maybe take him home and see how he felt about shiny black shoes.
Joe saw me watching and climbed down to eye level to return my stare. We stayed that way for a minute or two, watching each other with an occasional glance at the baby and her mama, the summer sun practically sizzling around us. Joe chewed his peanut, and I chewed my bubble gum. I was perfectly content and closed my eyes for a moment. In a flash, Joe reached out his skinny monkey arm and grabbed my ponytail.
There’s something about monkeys that you need to know – they’re strong. Like “a mom who lifts a car off her trapped child” strong. With my hair entwined in his fingers, he pulled my head against the bars of the cage. Repeatedly.

I must have screamed because dads came running from everywhere. Tall dads, young dads, red-faced dads, and my own dad. They swatted at the monkey who refused for a moment to let go. Finally, realizing dads are crazy strong too, Joe let go and retreated to a high branch. Utter chaos broke out. Dads were talking loudly, to each other and to the monkeys in general. Other kids were crying, but I was not. I stood, too stunned to make another sound, and looked up at Joe. Utter betrayal, that’s what I felt. The shattering of an illusion is never an easy thing.
Shortly after, the cage in the middle of the monkey park was removed. The monkeys were gone. A hurricane the previous year and three years before that had gone through and destroyed the cage, scattering monkeys to the four corners of Opelika. But they’d been replaced. Both times. My wanton display of bubble gum and Joe’s uncontrollable desire to possess it, were apparently more than the citizens of Opelika could tolerate.
I’d like to say I felt a crushing guilt at the downfall of the town’s one claim to fame. But I didn’t.
Regret? Yes. Because no longer could I stand face to face with the object of my desire.
Embarrassment? Not at all. Around my neighborhood, I became a legend. I’d survived a wild monkey attack, after all. My overriding feeling was disillusionment, though I didn’t know what to call it at that age. What I did know was that monkeys, as cute and beguiling as they may be, have a dark side. Maybe it’s all the peanuts.
We still call it the monkey park, those of us who have called Opelika home for enough years.
The creek still runs; the train still rides the tracks; and the swings and slides still sit where they’ve always sat. At the center, a cage stands. It’s smaller than the original. Inside it are several bronze statues of monkeys, sitting and staring. One looks remarkably like Joe.
I went to the monkey park the other day. It was a Saturday, and the place was packed. Laughter echoed up from the swing sets in the valley; bare feet splashed in the creek; and the whistle of the Rocky Brook Rocket called my name. So I rode, and I remembered. For just a few minutes, I could feel the sun on my little girl face, and it was so good to be in that spot. I go back often….
To read, to write, and to swing high enough to make the posts leave the ground. And some days…..some days, I even chew gum and wear a ponytail.
Wendy Hodge is an Opelika native, an empty nester and lover of all things Opelika. She previously had a column titled A Word or Ten, which was featured in the Tennessee Star Journal and is currently awaiting release of her first novel with Harper Collins Publishing Company.