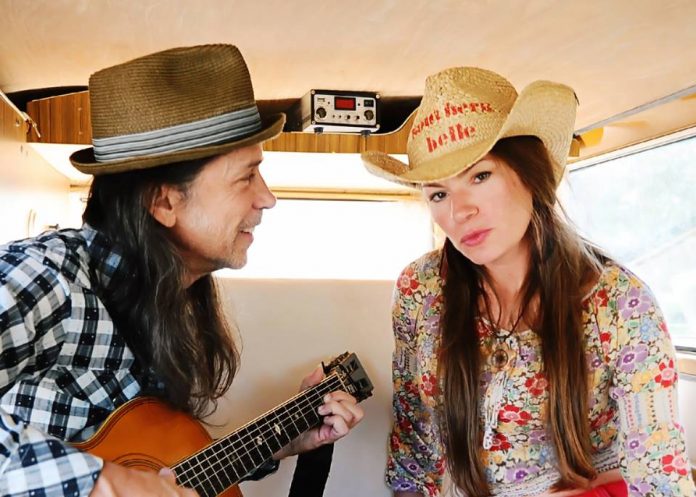 Sugarcane Jane, the husband-wife duo of Anthony and Savana Crawford, will make their Sundilla debut March 22.
Anthony alone, and Sugarcane Jane, might be quite familiar to music fans both local, and far and wide. Together, they account for 40 percent of the band Willie Sugarcapps (along with Will Kimbrough, Grayson Capps and Corky Hughes.) Before meeting and marrying Savana, Alabama-born Anthony went from Opryland to the Grand Ole Opry with Roy Acuff, to being on tour with Sonny James, Neil Young, Steve Winwood, Vince Gill and Dwight Yoakam. He has had appearances on Hee Haw, Austin City Limits, Live Aid, Farm Aid, Showtime, The Late Show with David Letterman, The Tonight Show with Jay Leno, the Today Show, Grammy Awards and more.
Anthony has been called the Forrest Gump of the music business, and those who say that mean it in the most complimentary and respectful way. Not the goofy Forrest Gump who stared into space and spouted one-liners that would look good embroidered on a pillow, but the Gump who seemed to be everywhere. His ability to play anything with strings has given him the kind of career that most artists only dream about.
But, the last decade has been an intricate part of Anthony’s ultimate direction. After marrying musical partner Savana Lee and settling down in the rural southern Alabama town of Loxley and having three children, Anthony is well planted in fertile soil. His focus now lies in his family which led him to create Admiral Bean Studio and Baldwin County Public Records. It is what now drives him as well as enables him to spend more time at home while continuing to explore all creative avenues.
When he and Savana are not together performing as Sugarcane Jane, they are performing with Willie Sugarcapps, and or recording CDs in the studio.
Showtime at the Auburn Unitarian Universalist Fellowship is set for 7:30 p.m. Advance tickets cost $15 and can be purchased at Spicer’s Music, World Cup Coffee and online at sundillamusic.com. Admission at the door is $20.
Sundilla organizers will provide free coffee, tea, water and food, and attendees are always welcome to bring whatever food or beverage they prefer.
For more information, go to www.sundillamusic.com. The venue is located at 450 W. Thach Ave.