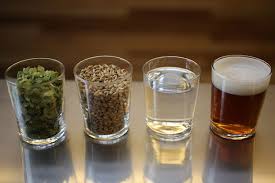 Want to start up your own craft brewery? Just make your own beer for yourself and your friends? Learn to grow and process hops as an added source of farm income?
Sept. 20, from 3-7:30 p.m., the Alabama Cooperative Extension Service is hosting a workshop aimed at helping you with all of the above. A Growing Hops and Home Brew Workshop will be held at the Lee County Extension Office at Suite 4, 600 S. 7th St. in Opelika. The workshop will conclude with a tour of Opelika’s own craft brewery, the Red Clay Brewing Company, and dinner at the brewery.
The workshop will include such topics as Hops Varieties in the South, How to Grow & Harvest Hops, How to Process Hops for Brewing, How to Home Brew From Start to Finish and Liquor Laws in Alabama. For more information or to sign up, call the Lee County Extension office at (334) 749-3354. Cost is $15, and that includes dinner.
Beer is more than a beverage, it’s an agricultural commodity, requiring both barley (a small grain) and hops in its manufacture. Many anthropologists even give beer brewing credit for beginning civilization. Once mankind were hunters and gatherers, constantly on the move, with no permanent homes or villages. But, to brew beer they had to stay in one place to grow the crops needed to brew their beer. Then came villages, towns, cities, education, the arts, etc.
Hops are the flowers (or seed cones) of the hops plant. They are used as a flavoring and stability agent in beer brewing. Hops give a bitter, zesty or citric flavor to the brew. The bitterness is judged necessary to balance the sweetness of the malt, another key ingredient.
In addition to adding flavor, hops are also used because of their antibacterial qualities. In other words, they keep beer from spoiling.
Craft brewing is a rapidly expanding industry, both in Alabama and nationwide, growing from practically zero ten to 15 years ago to a $25 billion industry today. Alabama craft breweries, including Red Clay Brewing Company, are looking to incorporate a “home-grown” factor into their beers. Hops, because of their many different varieties, can contribute a wide range of desirable flavors and aromas for particular types and styles of beers.
While most of U.S. hops are grown in the Pacific Northwest, they can be grown in Alabama. Once grown and harvested hops must be dried in ovens, called oasts, before being used in the brewing process. Hops require a high level of management and a large amount of labor, but, for farmers willing to make the effort, can be an extremely profitable crop with some varieties selling for $15 to $20 per pound.
Furthermore, if this workshop piques your interest in craft beer brewing sufficiently, you can further your knowledge by enrolling in Auburn University’s Graduate Certificate in Brewing Science and Operations program. One of the courses, Brewing Materials, actually requires students to develop a beer recipe that tastes the same every time you brew it, a task easier said than done, but absolutely essential for commercial brewing.