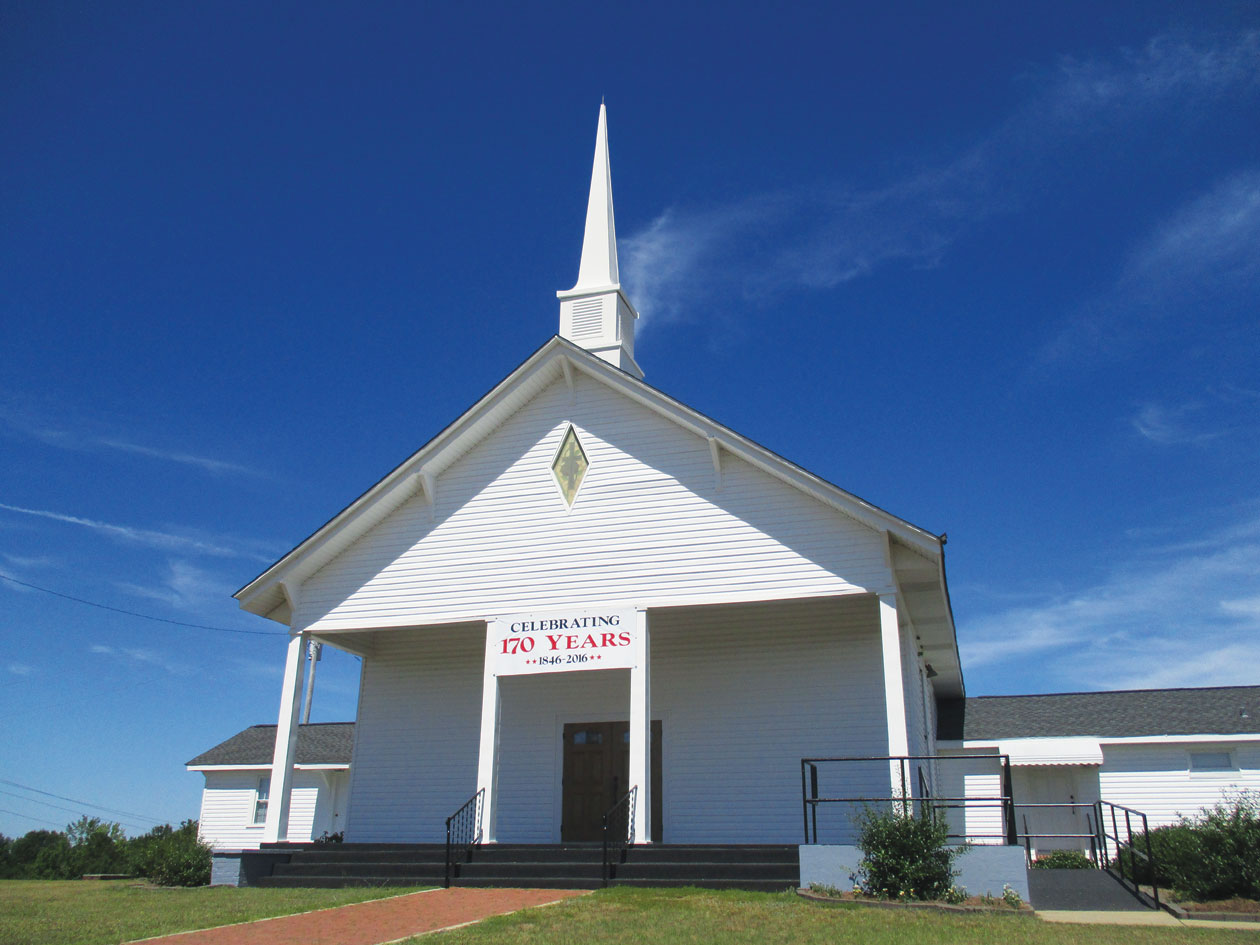 Members and friends of Hopewell United Methodist Church will come together this Sunday to celebrate the church’s 170th anniversary.
Located on the outskirts of Opelika at 1993 Lee Road 136, the whitewashed church sits atop a hill facing the road, a beautiful site for passers-by.
According to historical information provided by the church, Hopewell was founded in 1846 by the Jones, Lynch and Story’s families. The original church building was made of logs and was similar in construction to school houses of the time.
The membership steadily grew over the years, and in 1898, the church was expanded to accommodate the needs of a growing congregation.
In 1925, church members constructed a new sanctuary, which is still used for worship today.
Other various improvements to the church in the following years included: the installment of electricity in 1947, addition of Sunday school rooms in 1952, pulpit renovation in 1954 and an air-conditioning unit in 1973.
Fellowship meals are a common event at Hopewell, and for many years, these meals were held outside because of a lack of space. This problem was alleviated by the construction of a fellowship hall in 1998, which is the church’s most recent construction.
Responsible for many of these improvements were church members Jack and Carolyn McConnell, who have faithfully served in various church leadership roles. Carolyn said she feels confident that the renovations and additions made to the church have been beneficial.
“When I first came here after marrying my husband Jack, I saw that this church had a lot of potential,” Carolyn said. “Through the years we’ve added things like stained-glass windows, a steeple and a cross in our cemetery, but most recently we’ve done a lot of work on our sanctuary – re-carpeting it and adding new doors. I feel like the improvements to the church are nearly done.”
McConnell said she’s glad to have been able to contribute to the beauty of the building, but she said the best part about Hopewell isn’t the building, but the people in the church.
“There is a joy that the people have at Hopewell, which I believe is a direct reflection of their faith. I felt welcomed and loved when I first came in 1981 after marrying Jack, and I still feel that way even now,” Carolyn said.
Alicia Spado, a descendant of Hopewell charter members James and Eleanor Story, said that the church has played a significant role in her life.
“I grew up in Florida, but when I’d come up for the summers, I’d go to church for services and summer camps, which were something I always looked forward to,” Spado said. “I’ve recently returned as a member since 2014. It’s a small community church where anybody’s welcome. It’s classy and simple. We’re there to learn more about Jesus and then go spread the Word to others. That’s what Hopewell is all about.”
Pastor Drue Tubbs, who became Hopewell’s pastor in December 2015, said she has come to appreciate the kindness and genuineness of the church in her short time there.
“The people are so kind, and I really felt welcomed the first Sunday I was there,” Tubbs said. “They love the Lord and they love the community, so I am blessed to be able to preach and lead there.”
The church serves not only as a welcoming place of worship, but a group that is willing to help the community in any way it can, according to Carolyn.
“Once a month, we partner up with the Lee and Russell County’s meal programs, and provide meals for one person for an entire year,” Carolyn said. “We also work with Franklin Graham’s ministry Samaritan’s Purse, Storybook Farms, American Cancer Society’s Relay for Life or any other charitable organization we find and would like to assist and help. We’re a small church with a big heart.”
As the time approaches for the church’s homecoming, McConnell and Spado are busy organizing the event. Sending out letters to members, former members and pastors, and coordinating the meal for after the service are just a few of the tasks the two ladies have to do. But, according to McConnell, it is something to be excited about.
“It’ll be really great to have everyone there, and be able to come together to celebrate such a significant anniversary. It’s an exciting time to be a member of Hopewell,” McConnell said.
The church is facing a tough road ahead. An older congregation and its isolated location have caused a decline in membership over the years, but through outreach events, prayer and revival in the area, Tubbs said she believes the church has a chance to grow.
“My long-term goals for the church are to grow both in faith and outreach, and I think as long as we continue to be a welcoming and giving church, the church’s membership will grow,” Tubbs said.
The homecoming service will be held at Hopewell on June 26 at 11 a.m. The service will include music by locally-known gospel artist Harlan Burton, with a sermon from former pastor Rev. Daniel Randall. There will also be revival services that night and Monday night at 7 p.m. For additional information about the service or Hopewell, contact Alicia Spado at 332-3953 or Carolyn McConnell at 559-3567.