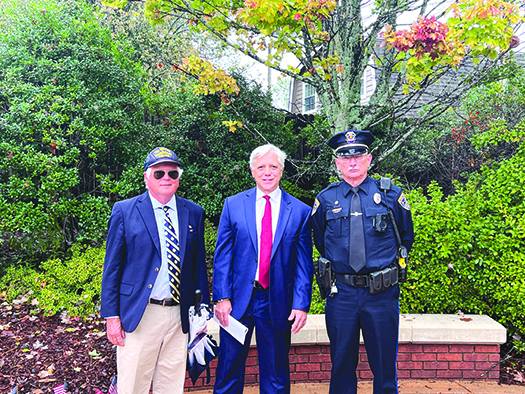 The city of Auburn held its annual Veterans Day ceremony to honor veterans and lay a wreath at the Veterans Memorial Monument.

“We’re honored to gather here today,” said Auburn Mayor Ron Anders. “… I’d like to start by thanking each of you for taking time out of your schedule to be with us, on this Friday morning. This is truly such an important holiday. It gives us time to take a break from our busy schedules to honor our veterans from all eras and all wars.”

The Auburn High School JROTC posted the colors for the event, and U.S. Army Sgt. Maryshay Ray served as the key speaker. Myron Thorton, a retired Marine and member of the Auburn Police Division, assisted Anders in laying the wreath at the monument.

“We lift up thankful hearts,” said Jeff Damron, pastor of the Union Christian Church, during the invocation. “We honor this day before you, our veterans, the worthy men and women, who in the day of decision, gave their best when they were called upon to serve and protect our nation.”

Ray began her term of service in 2011 and eventually medically retired after service in Germany. She is an Auburn 2020 graduate as well.

“She has a passion for giving back to her brothers and sisters in arms, as well as their families,” Anders said.

This is what Ray did — she thanked both veterans and their families.

“Thankfully, our great nation has always been blessed to have strong men and women with exceptional courage,” Ray said. “… They have risked their lives for our country, our people, our ideals and beliefs that we all, as Americans, treasure and hold dear. Our battles, our victories and our very way of life is not due to great moments or significant dates; they are due to the actions and sacrifices of these men and women who are willing to step in, raise their hand, say ‘here I am’ for their country and for the foundation of her freedom.

“America is the great country she is today because of her heroes, both past and present, selfless individuals willing to answer the call of duty, to put the nation’s interest above self-interest, to put patriotism above profit and those of who put love of country above love of self. Our veterans made that deliberate choice to live a life of sacrifice and service for the greater cause. And for America and her people, that has made all the difference.”

The Opelika Veterans Day program took place at the Opelika Public Library on Nov. 11 and the city welcomed Ronald Douglass to speak. He is the commander of the Twin Cities Disabled American Veterans (D.A.V.) Chapter 95 in Opelika.

Douglass represents many veterans as a 100% disabled American veteran and has been a member of the D.A.V. for 31 years.