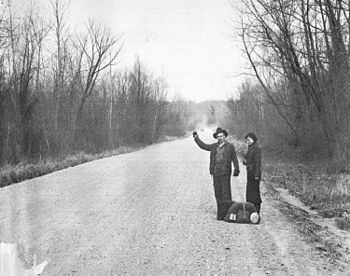 The other day Leada Gore of al.com asked “when was the last time you saw someone thumbing a ride in Alabama”?
Not recently, she wrote – answering her own question.
Why ?
Her short blog-like commentary directed the reader to an article in Vox.com which told of the decline of the practice.
That today, hitchhiking is a “forgotten art,” the Vox piece points out, is not so much from the fear of crime, though that is a factor, or the increased availability of mass transportation, which is something environmental activists and urban planners long for, but haven’t gotten.
No, to use the principle set down by the Medieval philosopher William of Ockham (1287-1347), the simple answer is usually the right answer and in this case the simple answer to why not many folks hitchhike any more is that more people own and drive cars.
Once again a Liberal Arts education proves its worth.
Now being a historian, in addition to wondering why something isn’t anymore, I am inclined to get all tangled up in figuring out what it was before it wasn’t – diagram that sentence and you are an English major. An old one, since you know how to diagram a sentence.
So I have to go back to why hitchhiking was once so prevalent, a trip down memory lane, for you see, I was once a hitchhiker.
But I am getting ahead of myself.
If you saw the movie “O’ Brother Where Art Thou,” you got a sense of the scarcity of transportation during the Great Depression. Outside of towns and cities there wasn’t much, so folks shared.
This carried over into the war years, where outside of every military base were benches on which was written “Give a Soldier a Lift.” People did.
After the war the practice, continued. I recall my father picking up guys in uniform on their way to and from somewhere we happened to be going too.
In my case, hitchhiking began coincidental with cow feeding.
We had a small farm about 12 miles from town, where we kept a small herd of cows.
During the winter, when football season was over, I would ride the school bus out there, walk back to the pasture, get hay and corn out of the crib, feed ‘em, then walk back to the highway and thumb home.
When I got to college I continued to hitchhike.
When I was at Marion Military Institute, cadets weren’t allowed cars, so on weekends, to get where I was going, I put on my uniform and stood by the road – thumb out. Looking like I was in the service of my country, rides came quickly, and if anyone asked what the MMI on my collar stood for I told them “Marine Military Intelligence.”
I guess they thought I was on some secret mission, because they never asked anything else.
Hitchhiking, I got to see Alabama – along with bits of neighboring states. More than once my ride was not going precisely where I wanted to go, so I ended up close, but not there. Trying to get home from Birmingham, where I went to college after Marion, I ended up in Greenville, where another kind soul picked me up and took me as far as Monroeville, where a third ride got me to my destination.
Over the years I saw parts of our state that I might not have otherwise seen – little towns that were thriving, others that were dying, mountains and valleys, sluggish rivers and swift flowing streams – and met some interesting folks.
Not once did I feel fear.
I wonder if my folks did?
I wonder how they felt when they dropped me by the side of the road with my suitcase, so I could ride my thumb back to college.
I know how I would feel today, if it were my son.
I wouldn’t do it. His Mama wouldn’t let me if I would.
But times were different then.
Today, he has a car.
Besides, I would not knowingly help him engage in something illegal.
Yes, illegal.
Alabama has a law that reads “no person shall stand in a roadway for the purpose of soliciting a ride.”
But remember, this is Alabama, and in Alabama there is always a catch.
And it all depends on what you mean by “in.”
“In” as in standing on the blacktop?
Or is the right-of-way part of the “roadway?”
Or what difference does it make anyway?
When was the last time someone was arrested in Alabama for hitchhiking?
Harvey H. (“Hardy”) Jackson is Professor Emeritus of History at Jacksonville State University. He can be reached at hjackson@cableone.net.