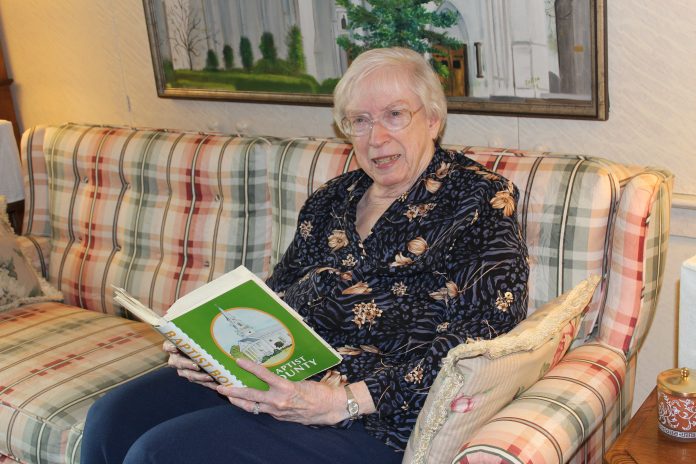 Sitting in the living room at the home of Edna and Gene Ward in Opelika, a large painting over the sofa is eye-catching. Edna and Gene both painted together the spectacular Christ the King Cathedral in Atlanta, but that is not the only church Edna has painted. She painted First Baptist Church of Opelika for the cover of both the church’s cookbooks.
Along with being an artist, Edna is known for her interest in history. Since retiring from working at the telephone company in downtown Opelika in 1987, she has worked off and on as the editor of Tap Roots, the quarterly publication of the Genealogical Society of East Alabama.
Edna remembers after she retired, she received a call from retired Judge Noel Baker who wanted to stop by to see her. He was president of the Genealogical Society and asked her to be the secretary-treasurer. Edna took over the volunteer work. Soon afterwards, she became the editor of Tap Roots.
While members of the society submit articles on family history, Edna has done a great deal of research on family names at local cemeteries.
Over the years, Edna has been willing to take on projects. Several years ago while visiting former fire Chief Albert Smith and his wife Mary Rose, the fire chief mentioned he wished there was a book on the history of the fire department.
Edna told him she could type, and started the project with the chief assisting. She did research as well for the book, which took two years to finish. Copies of the history of the Opelika Fire Department are still available at the Fire Dept. main office at Ave. B and 7th Street.
Edna then took on writing the history of the Opelika Police Department. Jacob Hancock, who was working on a PH.D, assisted her with the book. With both of them working on it, it took a year and a half to write.
Jacob and Edith didn’t receive payment for the book. Proceeds went to cover costs of printing. Remaining proceeds go to fund the DARE Program.
“Both the fire department and police department books were an honor to write and labors of love,” says Edna.
She is currently working on the history of Mechanicsville in northeast Lee County. In the 1850s, it was a thriving community with a wagon factory. While the Genealogical Society cleaned up the cemetery, Edna began wondering what happened to the people who lived there.
The church burned, and people sold their houses and moved away. Being in the backwater area, it was a busy place for making moonshine at one time.
She is hoping to have the writing project finished this winter, which will be available on a disc.
Edna grew up in Sand Hill near Chewacla State Park. Her father farmed and grew vegetables. Her mother enjoyed cooking. Edna was the youngest child in the family and wasn’t interested in cooking, but she helped with dishes.
After high school, she decided she did not want to attend college. She went to work with Southern Bell, later Bellsouth, in downtown Opelika and in Montgomery when the Opelika office closed. While working at Southern Bell, she met Gene, who was working with the fire department.
After they were married, Gene worked for McGinty Furniture Store in downtown Opelika. The owner also owned Fredrick Funeral Home at the time. Gene worked for both places.
He also worked for Uniroyal and then for Rodger’s Organs of Atlanta. Gene was co-owner of the company and then purchased the company, which he owned for 15 years. The Wards have a beautiful organ that Gene plays.
They don’t have children but have two dogs, Reggie and Lily. Both are rescue dogs.
Since Edna is busy with writing projects, she keeps meals easy and simple. She is sharing many of her mother’s recipes and from others in the family.
The Peach/Custard pie was one her mother’s recipes that she often made in the winter.  She dried the peaches in the summer to have for making the pie during winter months.

Edna’s sister, Carmen Smith, enjoyed working as a volunteer with East Alabama Medical Center Auxiliary. The Peanut Butter Cookies was her most requested cookie. She made many of them to share through the years.
The English Pea Casserole recipe was Gene’s aunt’s, Bert Hall, who was well known when she worked for the Polly-Tek clothing store and later for Curry’s. The recipe makes a large casserole that serves about eight. Gene prepares the recipe every year for Thanksgiving and Christmas.
The Genealogical Society meets the third Saturday in January, April, July and October at 11 a.m. at the Museum of East Alabama. At the next meeting on Saturday, Oct. 19, James P. Pate will speak on “The Annotated Pickett’s History of Alabama: And Incidentally of Georgia and Mississippi, From the Earliest Period.” The public is invited to attend.

Potato Soup
2 medium sized potatoes
1 medium sized onion
3 cups chicken broth
½ cup half and half
1 Tbsp. flour dissolved in ¼ cup water
Salt, pepper to taste
Peel and slice potatoes.  Peel, slice and chop onion.  Place in a boiler with chicken broth and cook until almost tender. Remove potatoes and onions from the stock.
Add half and half to the stock.  Dissolve flour in water.  Add to mixture and cook until thickened.  Add potatoes and onions back into liquid.
Add salt and pepper as desired. Serves 4.  (If soup is thicker than desired, thin with more chicken stock.)

Old-Fashioned Tomato Gravy
2 Tbsp. butter
2 Tbsp. flour
1 small tomato peeled, sliced and chopped.
Chicken broth
Salt and pepper
Melt butter; add flour and make a roux. When flour has browned, add chicken broth until thinned. Add chopped tomatoes. Cook on simmer for about 5 minutes.
Add salt and pepper to taste. Serve over rice. If there is any leftover, it is good for breakfast over a biscuit.

Squash Dressing
1 box Jiffy Corn Bread mix
1 can Margaret Holmes squash
1 can cream of chicken soup
½ cup chopped onion
½ stick melted butter
2 eggs
1 cup grated cheese
Salt and pepper to taste
Mix all above. Do not drain squash nor dilute soup.
Bake at 400 for 30 minutes in a greased 9-inch dish. Makes about 9 servings. Leftovers will keep nicely in the refrigerator and can be easily reheated.

Old fashioned Peach and Egg Custard Pie
2 cups dried peaches
Water to cover
1 cup sugar
Place dried peaches in water to cover; add sugar. Cook peaches and sugar until it is the consistency of jelly, which takes just a few minutes. Chop peaches.
For the custard:
3 egg yolks, save whites for meringue
1 cup milk
½ tsp. nutmeg
1 cup sugar
½ tsp. vanilla flavoring
2 Tbsp. melted butter
2 Tbsp. flour
8-inch pie shell
Place cooked peaches in the bottom of an unbaked pie shell.
Mix remaining ingredients to make a custard.  Pour the uncooked mixture over the peaches.  Bake at 350 for 35 to 40 minutes.  Prepare the meringue.  Spread over top of the pie.  Place back into the oven until the meringue is browned.
Meringue:
3 egg whites
2 Tbsp. powdered sugar
¼ tsp. cream of tartar
Combine ingredients and beat to stiff peaks.

Salmon Croquettes
14 oz. can of Double Q salmon, drained
2 Tbsp. Miracle Whip Salad Dressing
2 Tbsp. flour
1 egg
½ cup chopped onion
Salt and pepper
Mix all ingredients together and make six croquettes shaped flat like hamburgers.
Add 1 Tbsp. butter and 1 Tbsp. olive oil in a skillet. When hot, fry croquettes. When the first side has browned turn croquettes once to brown the other side. Takes about two minutes per side. Drain on a paper towel before serving.

English Pea and Asparagus Casserole
Bert Hall’s recipe
1 can English peas (drained)
1 small container of pimento peppers (drained and chopped)
1 can of asparagus (drained)
1 can of mushroom soup (not diluted)
1 can of cream of chicken soup (not diluted)
3 boiled eggs (sliced)
8 slices American cheese
½ box Cheeze-it crackers, crushed
Several thin pats of butter
Prepare a large casserole dish by spraying with non-stick spray or coating with oil.
Ingredients are layered in the following order:
First layer: 1 can of English peas; ½ of the pimento peppers; 1 ½ of sliced boiled eggs; the can of mushroom soup
Second layer: four slices of American cheese
Third layer: asparagus, 1 ½ of sliced boiled eggs; cream of chicken soup; 4 slices American cheese
Topping: Cheez-it crackers, crushed and topped with several thin pats of butter
Bake at 350 for 35 to 45 minutes. Serves 8 to 10.

Tomato Relish
My mother Lois Edwards made a tomato relish with fresh tomatoes that was a family favorite. This recipe is much easier.
14.5 oz. can stewed tomatoes
1 [soft ball size] sweet onion, peeled and chopped
½ cup apple cider vinegar
½ cup white, granulated sugar
1 heaping Tbsp. brown sugar
¼ tsp. allspice
¼ tsp. cloves
¼ tsp. nutmeg
¼ tsp. salt
1 tsp. cornstarch – dissolved in a little water
Chop onion in small pieces. Cook it over low heat with about 1 Tbsp. butter and 1 Tbsp. olive oil.
Drain tomatoes and save the liquid. Mix the liquid with apple cider vinegar, sugar, allspice, cloves, nutmeg and salt. Coarsely chop the tomatoes.
Combine all the above except the cornstarch in a non-stick boiler. Cook until liquid is reduced about 25 percent. This will take maybe 15 minutes on medium heat.
Dissolve cornstarch in a small amount of water and add to tomato relish. The cornstarch will thicken the relish quickly, but it needs to simmer a while longer – maybe 15 minutes. Let it cool.
Put it in a sterilized jar with a tight lid. This will keep a long time in the refrigerator.
It is delicious on peas, butterbeans, ham, chicken or pork chops. It’s also good on a hamburger. Makes one pint. Can also use fresh ripe and green tomatoes. It would probably take six to eight medium sized ones or enough to fill a 16 ounce measuring cup when chopped.

Green Beans and New Potatoes
½ lb. fresh green beans
½ lb. fresh new potatoes
½ onion, chopped
1 tsp. sugar
1 pkg. Goya ham seasoning
Prepare beans by cutting off stems and cutting beans in one-inch segments.
Wash potatoes; don’t peel. Cut them in half. Peel and chop the onion.
Add all together in a pot with enough water to cover them. Add sugar and Goya seasoning. Bring to a boil, reduce heat and cook until tender. May take 8 to 10 minutes. Makes about 4 servings.

Baked Potato and Onion for Two
1 large Idaho potato
1 large onion
Seasoned salt and pepper
Peel potato and slice crossways in ½ inch pieces.
Peel onion and slice crossways in ½ inch pieces.
Take two pieces of aluminum foil and put half of each on the foil placing alternating onion between potato. Add a pat of butter to the top of each package along with salt and pepper. Bake in a 350 oven for 30 minutes.

Banana and Yogurt Dessert For Two
1 banana
Vanilla Wafers
1 low fat vanilla yogurt
In two small dessert dishes place a vanilla wafer in each. Peel the banana and slice crossways.
Put a layer of banana, a layer of yogurt, a layer of wafers until all is used. Add crushed wafers in a ring around the top. If made ahead flavors will blend. Serves two.

Rice
1 cup white rice
2 cups chicken broth
Salt and pepper to taste
Heat the broth to a boil; add the rice, cover and bake in oven at 300 for 30 minutes. Fluff with a fork and serve.