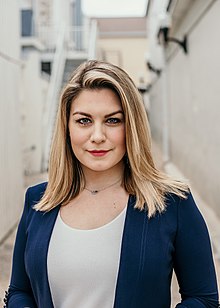 Mallory Hagan announces her support for reform legislation that will improve transparency and end unlimited secret donations to political campaigns.
“Today, I am proud to be one of 107 candidates running for the U.S. House who has committed to returning the power of politics back to the people. This effort is centered on one simple idea: that government should work for everyday Americans–not special interests.” said Mallory Hagan, candidate for Alabama’s Congressional District 3. “The American people know that Washington is not working for them, and I agree. That’s why I strongly support this reform legislation as the first item of business in the next Congress, ending Washington’s systemic corruption.”
The reform legislation is organized by End Citizens United, a group created after the Citizens United v. FEC Supreme Court decision that allowed for large, secret spending in political elections. The group is focused on reforming political campaigning to ensure transparency and reduce the influence of big money in politics.
“My campaign has received over 90% of our contributions from individuals, and we do not accept any corporate PAC money. Congressman Rogers’ campaign receives over 60% of his funds from secretly funded corporate PAC contributions. The difference is stark and clearly explains who each candidate will work for in the next Congress. While Rogers has focused on fighting for big businesses for the past 16 years, our communities have suffered with closing small businesses, closing hospitals, stagnant wages, and underfunded schools. It’s no wonder that public trust in government is at an all time low.” said Mallory Hagan.
Congressman Rogers gets 62% of his contributions from large PAC contributions while Mallory Hagan’s campaign receives 92% from individual contributions according to open secrets June 30th update.
“I am committed to limiting the undue influence of big donors on campaigns, reducing the unchecked power special interest groups have in our government, and creating accountability for our elected officials. If we are going to make government work for the people then we must change the way Washington works for good.”
Read the reform letter here: https://reformfirst.org/the-letter/ . The effort is using the hashtag #ReformFirst.