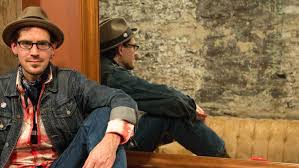 Greg Klyma will be in concert at Sundilla April 25, with showtime set for 7:30 p.m.
The Buffalo-born troubadour has settled in Boston, though Klyma still spends most of his time on the road. He is keeping the American folk tradition alive with his enduring themes, articulate and amusing stories and populist ideals.
Another apt descriptor is “genre diversity,” which shouldn’t come as a surprise from an artist well studied in American music.
“Old school country, classic rock, and singer-songwriter folk are three styles of music that I love. I love to listen to ‘em. I love to play ‘em,” Klyma said. “My wheelhouse finds me standing in the long shadows of Bob Dylan, Kris Kristofferson, Willie Nelson, Steve Earle, Tom Petty and Mick & Keef, to name a few.”
Klyma’s birthdate puts him squarely in the middle of Generation X, but he is an old soul. He has been living on the road performing music full-time since August 1998.
Traveling from the Rust Belt to FEMA villages with guitar and mandolin in hand, capturing the stories of the people he’s met and seen for over a decade, he has honed his songwriting and storytelling while developing a show that lands somewhere between the worlds of Steve Earle and Steve Martin – it’s literate, witty, visual, sometimes comical and forever building on tradition while seeking its own voice.
Sundilla shows are held at the Auburn Unitarian Universality Fellowship, which is located at 450 E. Thach Ave. Advance tickets cost $15 and can be found at Spicer’s Music, World Cup Coffee and online sundillamusic.com, and tickets at the door cost $20. Showtime is set for 7:30 p.m.
The Sundilla Concert Series & Radio Hour has been bringing the world’s music to Auburn since 1993.
Free coffee, tea, water and food will be available, and as always attendees are welcome to bring whatever food or beverage they prefer.