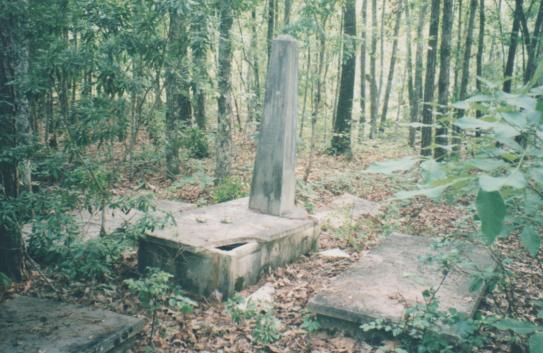 During the holiday season, Flint Hill Cemetery near Salem was vandalized, with an obelisk of a grave belonging to Samuel Jones being toppled to the ground.
In the 1840s, Jones, his first wife Sarah and 11 of their 14 children moved from South Carolina to northern Russell County (which became Lee County in 1866). In December 1854 at 51 years old, Sarah died. In September 1855, Samuel and Frances W. Moore were married in Russell County. This marriage was blessed with six more children, giving Samuel a total of 20 children from his two wives.
In 1881, after a long life of 83 years, Samuel Jones died and was interred at Flint Hill. At some point, his children erected the obelisk over his grave. Frances died in 1883.
Samuel’s grave lies between the graves of his wives Sarah and Frances.
According to Jones family lore, Samuel had walked about 20 miles from his home to Opelika and back a few weeks before he died.
The walk caused blisters on his feet, which paired with his diabetes and an eventual infection, ended up being one of the primary contributors of his death. From the walk he had blisters on his feet.
Several of Samuel’s children and grandchildren are buried at Flint Hill. One great-granddaughter, Mary Lee Jones, was a daughter of W. S. “Buck” Jones, a grandson.
W. S. “Buck” Jones, a Lee County’s Sheriff, was the son of DeKalb Jones, and a grandson of Samuel’s. Buck died on June 29, 1932 from gunshot wounds suffered while attempting to make an arrest. The Lee County Detention Center is named in honor of him.
More than 140 years old, Flint Hill is located off Lee Road 254, four miles north of the Salem community. Once nestled in a grove of protective hardwood trees, the cemetery contains the graves of several prominent citizens, some of which date back to the 1850s.
For a number of years, the land surrounding Flint Hill was owned by MeadWestvaco, a national timber and wood products corporation with a record of respecting the old cemeteries on its properties. Several years ago, Weyerhaeuser, another national timber conglomerate, bought the land.
During a routine check of the cemetery in 2016, most, if not all of the hardwood trees there were dead or dying. After the protective leaf canopy no longer existed, undergrowth had an opportunity to multiply unchecked.
Now, there is the possibility of further damage from falling dead limbs and trees. And now, this senseless vandalism has happened.
“Why on earth people would want to cause not only destruction, but also bring pain to others by doing something like vandalizing a tomb? Sure does baffle me,” said Lindsay Holland, one of the volunteers who recently helped remove much of the overgrowth in the cemetery and is committed to keeping it clean in the future.
“The (Lee County) Sheriff’s Office is concerned about the vandalism that has been visited upon cemeteries in rural areas of Lee County. It is a matter of basic respect,” said Sheriff Jay Jones. “Families should not have to worry about the final resting place of their loved ones being disturbed. We appreciate and will continue to work with our (Lee County) Cemetery Preservation Commission to identify and apprehend anyone involved in these offenses.”