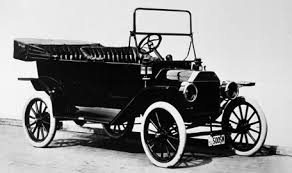 By Bob Sanders
Grandpa Sanders had a T-model. I can still see it, although the picture is getting kind of faded in my mind. I’veread a lot about Model Ts, about how over 15 million of them were sold between 1908 and 1927, and how, during that time, old Henry perfected the assembly line and cut the time required to make one from 12 1/2 hours in 1908 and along in there to one and a half hours by 1914, and how he was able to cut the price to less than $400 by 1916 — and still make a profit.
Grandpa’s was one of the later Model Ts. In fact it must have been one of the very latest, about 1926 or ’27. I recall it as being relatively chunky and modern looking — by Model T standards — as opposed to the frail-looking, spindly earlier Model Ts, like the one whose battered and rusted hulk rested in the briars and weeds near the spring down the hill from Grandpa’s car shed.
The old car was probably black, but somehow I have the impression of a grayishness about it. Most of the time, it stayed out in the car shed, which was an entity well worthy of an entire column in itself. The car would sit out there  on the beautifully dry and dusty dirt floor (with only one or two pretty big oil spots under the usual position of the car to interfere with the workings of what must have been the doodle-bug capital of the world}. It seemed to feel vastly superior to the even older buggies and pieces of buggies that were crammed into a little side shelter tacked on the main shed.
It was a wonderful place to play. We’d sit in the car, messing around with the various levers and pedals. It didn’t seem to have a regular gear shift like some of the more modern cars, them hot V-8s from Ford and knee-action things from Chevrolet. No, it had something called the “spark,” and one or two other stems on the steering column. And I gathered that you sorta selected gears by what you did to the clutch pedal, or the pedal where the clutch pedal should have been. Anyway, we’d play in it, going through the gear-change sequences with our voices and turning the big fat steering wheel back and forth.
Grandpa didn’t drive much by then. He shouldn’t have at all, probably; his eyes were getting pretty bad. But once in a while, he’d go into town, down the hill with the huckleberry bushes growing out of the red banks along the side of the road, past the big gully, and on by Aunt Lessie’s toward town.
He’d say I was his eyes, acting blinder than he really was to make me feel important. I’d work hard at my job, eagerly searching for any possible hazards along our route, especially where our little road angled into the highway at the edge of town.
“It’s OK,” I’d say importantly, authoritatively; or “Hold it! Something’s coming!” Or “You can beat it if you hurry.”
“Ah, you’re doing a good job,” he’d say. And we’d motor on past Holiday’s little pond and the big Strickland field off to the left and cross Town Branch and be in the middle of town, right on the courthouse square.
After he’d tended to his town business, we’d get back to our battle stations, me in my observer’s position, and get ready to head back home, after a little safety countdown to make sure I was alert and had my eyes peeled, ready for any emergency in that heavy downtown traffic and everything. And then we’d go tucka-tucka-tucka-ing back up the old road to home, perhaps stopping by Aunt Lessie’s a little bit to sit and rock and talk some, in the cool dog-trot if it was in the summertime.
He tried to drive without me one day, though. He should have known better. He was really getting near-sighted by then. All by himself, he cranked up the neat little Model T and came out of the car shed a mite fast, and faster still when he went by the house and tried to make the turn into the main road. He somehow got his bearings messed up on the sloping bank that surrounded the flat, swept dirt yard. We were in the front of our house, a couple hundred yards away, and saw it happening. The car started around the curve of the bank, teetered for just a moment, then plomped down on its side.
Daddy went long-legging it down there in a hurry. Duard Roberts happened to be walking down the road at the time, and together they checked to see if Grandpa was all right. He said, somewhat shakily, that he was, and they got the top door, as it were, open and Grandpa climbed out, not too much the worse for wear. Daddy and Duard got the car back up on its wheels, and except for a few scratches and minor dents there was apparently no damage. But I reckon it put a more severe dent in Grandpa’s self-confidence.
The Model T sat out in the nice dust in the old car shed still, surrounded by shelves laden with marvellous assortments of nuts and bolts and tools and harness pieces and I don’t know what-all. Daddy’d use the car sometimes. But somewhere along in there it disappeared; I don’t remember where it went. Daddy started parking his “37 ashes-of-roses colored pick-up in that same spot.
And Grandpa never did drive anymore, even with my help.