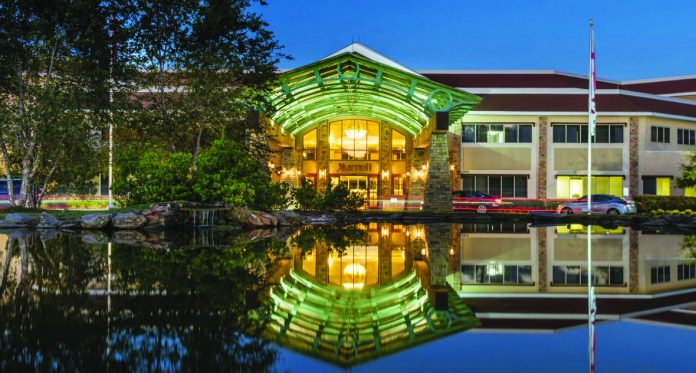 Recent awards and designations put The Marriott Hotel and Conference Center at Grand National on the map and at the top of its game. The hotel was named 2017 Hotel of the Year by Marriott. The editors of Golf Digest magazine recognized the hotel as a top golf and resort destination along the Robert Trent Jones Golf Trail for the third year in a row.
“Last year we were bumped up from a three to a four diamond AAA status. We are the only hotel in the Opelika/Auburn area that holds four diamonds accreditation with AAA,” said Brooke Kastner, director of sales and marketing at Grand National. “When our new spa opens, Marriott is going to change our designation to Resort Destination with Marriott. There are only 17 of those in the whole United States.”
The new spa, set to open in September, along with renovations to the restaurant and the addition of 92 guest rooms, is what brought all the accolades to the Grand National. “The spa is a 20,000-square- feet facility with three floors. The first floor is a full service spa with eight treatment rooms for massages and facials, along with separate men and women’s areas with whirlpools and infrared saunas,” Kastner said. “‘The second floor will be salon services – nails, hair, makeup and a bridal suite. The third floor will be a fitness facility with state-of-the-art equipment.”
The expansion and renovations to the bar and restaurant are complete, and they are open. A new chef will also be hired. “If you haven’t been out here in a few years, those areas use to be a little more closed off. We took some walls down and opened it up. There’s more seating and a new concept, name and menu, which will be announced in September along with the opening of the spa.”
Kastner added that the new restaurant is now on Open Table. “People interested in coming out can make a reservation through Open Table. We also use it for all our holiday functions – Mother’s Day and Easter buffets, graduations. A lot of folks would rather use the online service to make reservations when it is more convenient.”
In a surprising move, after three years at the Robert Trent Jones Golf Trail’s Grand National Course, the Barbasol Championship moved the event to Lexington, Kentucky.   “Barbasol was originally planned to be a four-year event. We had it for three,” Kastner said. “The best thing about having Barbasol here was that it showed an international market what we have to offer here in Opelika and the resort itself. It generated more people coming into the area that didn’t know we were here. So, even though it was here three years instead of four, I think the marketing potential we got from it was a positive.”
Due to the recent awards and the Barbasol Championship’s cancellation at the course, Kastner adds that Opelika is more on people’s maps than in the past.
“I still think we are that hidden little gem that not everybody knows about, which is okay, we still want to be that special place for people. But I definitely think the word is out that Opelika is the place to go.”