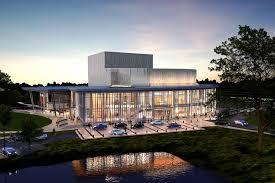 The Jay and Susie Gogue Performing Arts Center at Auburn University began selling full season and series subscriptions on Wednesday for its 2019-20 inaugural season.
Subscriptions, which have been available exclusively to Gogue Center donors and sponsors, are now open to the general public and can be purchased online at goguecenter.auburn.edu or by telephone at 334-844-TIXS (8497).
Season subscriptions provide patrons access to each of the inaugural season’s 27 performances, and series subscription packages include tickets to three performances per series. Both subscription plans are available at four price levels, with full season subscriptions starting at $625, which is less than $24 per show, and series subscriptions beginning at $75.
“By becoming a subscriber, patrons can secure tickets for our entire inaugural season—whether it’s for all 27 season performances or just the three shows featured in one of our nine genre-specific series,” said Executive Director of the Gogue Center Christopher Heacox.
Subscriptions were first made available to Gogue Center donors and sponsors in fall 2018 and have sold quickly since their initial release. Remaining subscriptions are expected to sell fast since they were released on Wednesday to the general public.
“Buying a subscription now enables patrons to secure the best possible seats at the greatest value,” Heacox said. “We’ll offer additional packages and single tickets in the coming months, but the best way to guarantee a seat at a performance is to subscribe now.”
The Gogue Center’s historic first year will bring an eclectic mix of headlining acts to East Alabama, with performances spanning nine distinct series, including Americana Roots, Broadway, Celebrity Concerts, Chamber Arts, Dance, Family, Global Stage, Jazz and Vocal Songbook. Season highlights include performances by surf-rock legends The Beach Boys; the Jazz at Lincoln Center Orchestra with Wynton Marsalis; star of stage and screen Sutton Foster; banjo virtuoso Béla Fleck and the original Flecktones lineup; soprano Renée Fleming; acclaimed choreographer Camille A. Brown and hit Broadway musicals “RENT 20th Anniversary Tour” and “Waitress.”
In addition to its robust season lineup, the Gogue Center will present special events and performances throughout the year, the first of which will be its Grand Opening Festival Aug. 22 to 25.
The four-day celebration will feature a different musical act each day, including concerts by Jason Isbell and the 400 Unit with special guest Molly Tuttle, Michael Feinstein and Friends and bel canto tenor Santiago Ballerini. Tickets to the Grand Opening Festival and other events and performances programmed outside the inaugural season schedule are not included with subscriptions and must be purchased separately.
For additional information or to purchase season and series subscriptions, visit goguecenter.auburn.edu or call 334-844-TIXS.(8497).