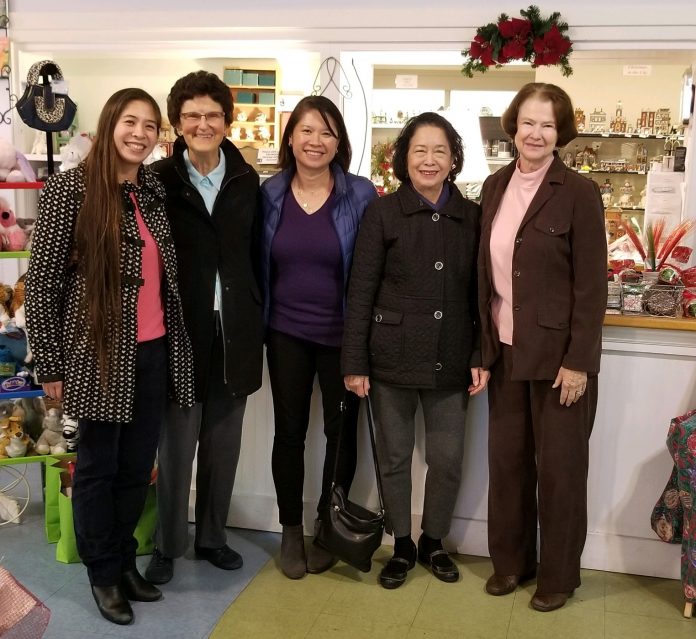 By Ann Cipperly
For the
Opelika Observer

When Dr. Joanne Smith T was serving as a missionary in Vietnam in the late 60s, she had a small clinic that met in a church and taught medical students at the city hospital in Saigon for three years, becoming close friends with the students. When Vietnam fell, most of the students fled the country. One of her students, Dr. Nhung Thi Tran, contacted Dr. Smith T to sponsor her family, arriving in Opelika in June 1975.
Dr. Nhung Thi Tran recently returned to Opelika to visit Dr. Smith T and others she knew in the community. On a cold afternoon, Dr. Smith T, Barbara Patton and Nhung met at the Smith T home on North 8 th Street to remember when the Vietnamese family came to Opelika to live.
Nhung’s husband, Dr. Nguyen De, was captured as a Viet Cong prisoner in April 1972. For the next 30 months he was forced to do hard labor, building huts while being moved from camp to camp. He was kept in tunnels and grass huts and forced to grow his own food.
In 1974, he managed to escape one rainy night by getting into a float and drifting down the river. After 12 hours in the river, he was discovered by government workers who thought he was deceased. The doctor was so weak that he could not walk and had lost 30 pounds from being in the communist camp.
He managed to return to Saigon to join Nhung and their two children. As the family planned to leave the country, they were instructed to not tell anyone of their departure, as it would increase their chances of being shot when Saigon fell.
Communist forces had surrounded the Vietnamese capital. In April 1975 the family fled the country with just a small suitcase, as it fell to the communists.
The family boarded a jet at Tan Son Nhut airport and flew to Clark Air Force Base in the Philippines where the refugee process began for them to start their new life. The next day they were flown to Wake Island to another refugee camp.
While at Wake Island, Dr. Nhung Thi Tran wrote Dr. Joanne Smith T, who had been her friend and instructor at the medical school in Saigon, to ask her to fund them as a sponsoring family once they arrived in the U.S.
The family was flown to a refugee camp at Pendleton, California, where they lived in a tent city to wait word of having a sponsor.
Dr. Smith T had a love for the Vietnamese people. She had studied the language and enjoyed teaching her students. While she was in Saigon, rockets would hit the city, but she didn’t feel she was in danger and continued teaching for three years.
Having a desire to help the family, Dr. Smith T organized a meeting May 15, 1975, at the fellowship hall of the First Presbyterian Church, where local citizens who were concerned for the welfare of the refugees took steps for the sponsorship process and to secure funds for refugee families. The group was named the Vietnamese Resettlement Fellowship.
The group, which included Barbara Patton as an officer, continued to meet at the First Presbyterian Church and Trinity United Methodist Church.
On June 5, 1975, Opelika welcomed Dr. Nguyen De, his wife Dr. Nhung Thi Tran and their two children, Nguyen Phuoc Minh Nhat and Nguyen Thi Minh Doan.
The family lived with Mr. and Mrs. Holmes Floyd at their home on Second Avenue in front of the Opelika Mill. The Floyds’ daughter, Mary Ann Rawlinson, and Cherry Sue Jackson were very much involved in assisting with the group.
While living in Opelika, Nhung said, “It is a welcome land for us. We find everything so beautiful here.
“It is hard to leave our country,” she added. “We did not expect to leave forever. We thought there was going to be a battle for Saigon. Two days after we left , we found out that Vietnam was completely communist.”
Since the standards tor medical doctors are different in Vietnam from this country, the couple took equivalency tests to receive their license to practice medicine here. They applied for U.S. citizenship as soon as they were eligible.
Nhung worked at a commercial sewing business for a while before starting her training, while Dr. Nguyen De worked with an ambulance service.
While they lived in Opelika they had another daughter.
After the family left Opelika, Nhung moved to Chicago to start her medical training. After three years, the family relocated to New York and Pittsburgh for her husband to finish his training.
“I visited Opelika twice before our recent visit,” Nhung says, “but this time it was much more meaningful since I had my two daughters with me. Aline, the youngest one, was born at Lee County Hospital, and she too was very excited to come back to her birthplace. Even her name has a meaning since it is the first two letters of the state.”
Nhung’s husband has passed away. She is now living with their son in St. Louis, Missouri.
Dr. Smith T and Barbara Patton were both excited to see Nhung and her daughters, as well as being happy they are doing so well. Both of the daughters are now physicians too.
“I fulfilled my wish,” Nhung says, “to have my family come back to the place where we started our new life in the USA.”