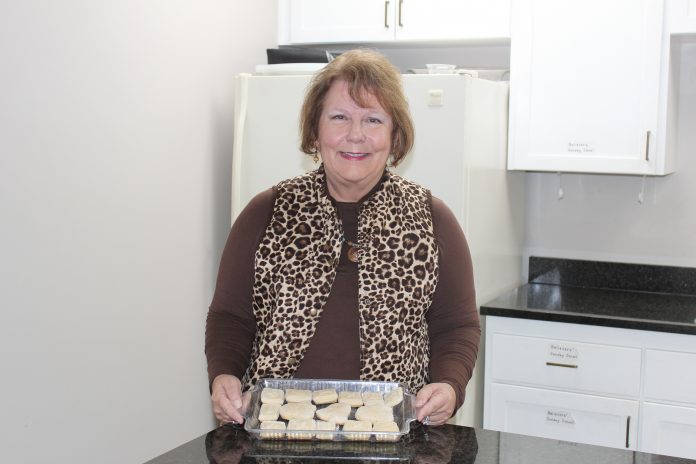 Frances Haupt Blackburn grew up in a small German community called Elberta, located near Foley in Baldwin County, that was settled by German immigrants in 1904. Now that she and her husband Art have grown children and are retired, Frances is reviving and preserving the recipes and cuisine of her heritage.

“My Haupt grandparents were from Tattlingen, German, and immigrated to America in 1905,” says Frances. “My father, John Haupt, was born in New Jersey and was a baby when the family moved to Alabama.”

German was spoken in their home. Until the mid-1970s, the church Frances and her family attended had two services, one in English and another in German.

Frances’ parents met while they were students at Auburn University, which was API at the time. Her mother was from Ashland, and she learned to cook German dishes to please Frances’ father.

“When I was growing up. my mother was trying to fit into the German community,” says Frances. “It was common in the grocery store to hear people conversing in German. As a child, I took it for granted, as it was just the way it was.”

During the summer months, Frances would help her mother, who was a former home economics teacher, freeze and can vegetables.

“She was an excellent baker and cook,” says Frances. “I spent lots of time in the kitchen with her baking, cooking and preserving foods.” Since seafood was plentiful, her mother served a seafood dish at least once a week.

Her mother made bread once a week until she was almost 80 years of age. Frances’ German grandmother was also an excellent cook.

Frances and Art met in high school and attended Auburn University. “I grew up with these German foods and married a southern boy,” says Frances. “Art is from Wadley, Ga. He wanted me to learn to cook like his grandmother. He was not interested in eating the German foods at that time. My mother learned to be a great German cook and left behind her southern cooking with cornbread and peas. The southern cooking would have suited Art just fine.”

Frances and Art married after graduation from Auburn and moved to Albany, Ga., where he worked for Firestone, and she taught home economics. In 1982, Art accepted a position with Ampex, and they moved to Opelika. Art became plant manager at Ampex.

Frances worked for East Alabama Mental Health for a number of years until she received her master’s in school counseling. She then worked in Phenix City and Lee County schools as a counselor for eight years.

In 2003, the Blackburns quit their jobs and moved to Ecuador where Art was the administrator of a mission hospital. Frances had many challenges cooking in a different culture, as the ingredients were different.

They returned to Opelika in 2008. Frances became a counselor at Horseshoe Bend School, while Art worked with Management Recruiters, Inc. Since they retired, the Blackburns spend time between living at Lake Martin and Wolf Bay at Orange Beach, but they consider Opelika home.

The Blackburns have three children. Daughter Jessica and her husband, Seth Ruff, who both grew up in Opelika, have a 16 month old son, Tucker. They moved to Panama City last year.

Frances and Art’s oldest son, Ben, is an officer at the Opelika Police Department, and his wife, Amy, teaches at Southview. They have two sons, Paxton, 11, and Barrett, 9, who attend Opelika City Schools. Son John and his wife, Sarah-Anne, live in Auburn.

The traditional German cookie traces back over 700 years. Frances has baked a couple of batches every Christmas since her and Art married 45 years ago. She uses specialty carved rolling pins or blocks embossed with decorative designs. They can also be turned into works of art with food paints.

Frances is enjoying making her family’s recipes and trying to modernize them. She is experimenting cooking some of the recipes in a crock-pot or instant pot rather than simmering on the stove top for half a day.

Frances’ mother baked homemade bread, and Frances remembers that the house would smell wonderful. Frances changed using bacon fat to olive oil in the recipe. She makes a version of the bread and kneads it with her Kitchen Aid mixer.

Her mother’s recipe for Ring-A-Lings can be made the night before, stored covered in the refrigerator and baked the next morning for breakfast. Frances researched this recipe and discovered it won the 7th Pillsbury Bakeoff in 1955, and the recipe was printed on the back of Pillsbury flour.

The Cinnamon Stars cookie, a light macaroon type confection, is a family favorite. When Frances was 12 to 14 years old, she entered the cookies in the Baldwin County Fair several times and won blue ribbons each time.

The Jager Schnitzel can be prepared with or without the gravy and is served with egg noodles. When Art and France visited Israel last year, they enjoyed dining on chicken schnitzel several times.

Frances is planning on putting together a family cookbook with the German recipes to preserve for future generations. Getting the recipes together has brought back wonderful memories of her childhood and the women in her family who were great cooks.

The Blackburns enjoy going back to Elberta when the town celebrates its German heritage with a sausage festival the last weekend in October and last weekend in March. “It attracts thousands of people,” says Frances. “They offer delicious German baked goods and filled cabbage, as well as other entrees.”

Look over Frances’ recipes and add a touch of German heritage to your menus this coming week.

Cinnamon Stars/Zimtstern
5 egg whites
1 lb. powdered sugar
1 Tbsp. cinnamon
1 1/2 lbs. shredded pecans or almonds
Beat egg whites until frothy with an electric mixer. Gradually add sugar and beat until it will stand in soft peaks. Fold in pecans and cinnamon. Chill 1 hour or more.
Drop by teaspoonfuls onto parchment paper lined cookie sheets.
Bake at 350 degrees for 15-20 minutes or until firm.
Allow to cool on pan for 5 minutes before removing to cooling rack.
Store in air-tight container.

Springerle
4 eggs
2 cups sugar
1 tsp. pure vanilla extract
1 Tbsp. anise seeds, crushed
4 plus cups all-purpose flour
2 tsp. baking powder or ½ tsp. ammonium bicarbonate
Place eggs in bowl of a stand mixer and beat until frothy. Gradually add the sugar and beat until it is pale lemon colored – 10 minutes.
Add the remaining ingredients slowly and when dough becomes thick, mix with wooden spoon. Add flour until you have dough which is stiff enough to roll.
Place 1/3 of dough on floured surface and roll until it is 3/8 inch thick. Roll again with springerle rolling pin. Cut and place on parchment paper covered baking sheet. Continue working in small batches until all the dough is used.
Cover baking sheets with towel and let rest for 12-18 hours.
Preheat oven to 325-350 degrees. Bake cookies 10-12 minutes or until firm. Cool on wire rack and store in air-tight container.
(These keep well. My mother baked them right after Thanksgiving for the Christmas season.) Makes 4-5 dozen.

Grandma’s Butter S’s
2 sticks real butter
1 cup sugar
5 egg yolks
4 cup flour
1 tsp. baking powder
1 tsp. vanilla
1 egg white, whipped until frothy
Sprinkles, if desired
Sift the flour and baking powder and set aside. Cream the butter and sugar with a heavy-duty mixer. Add yolks one at a time and mix well. Add the flour mixture ½ cup at a time until all is added. Stir in the vanilla.
Cover bowl and chill at least 1 hour.
Roll between 2 sheets of waxed paper to a thickness of ¼ of an inch. Cut in desired shape. (My grandmother cut the dough into 2 inch strips by ½ inch wide and curved each into an S shape.) Place carefully on lightly greased baking sheet. Brush with whipped egg white and add sprinkles, if desired.
Bake at 350 degrees for 12-15 minutes or until golden brown.
Cool on wire rack. Store cookies in an airtight container.

Rouladen
Serves 8
8 slices top round beef, about 4 inch x 6 inch and ¼ inch thick
1/3 cup spicy mustard
8 dill pickles, sliced lengthwise, optional
1 medium yellow onion
Salt and pepper
For gravy:
1 Tbsp. butter
1 Tbsp. cooking oil
1 medium onion
1 clove garlic, minced
1 large carrot, chopped
1 large celery stalk, chopped
1 cup dry red wine
2 cups beef broth
1 Tbsp. tomato paste
Prepare the roulade by spreading each beef slice with mustard and sprinkle a little salt and pepper overall. Place the pickles and chopped onions on each beef slice. Toll up the beef slices, tucking in the sides and securing the rolls with toothpicks or cooking twine.
Heat the butter and oil in a heavy Dutch oven or pot, Brown the roulade on each side and then set them aside on a plate.
Add the remaining onions to the pan and add more oil, if necessary. Stir and add garlic and cook a minute longer.
Add the remaining vegetables and cook another 5 minutes. Pour in the wine, bring to a rapid boil for 1 minute, reduce heat to medium and continue simmering 3 minutes. Add the beef broth, tomato paste, bay leaf and salt and pepper, as desired.
Nestle the beef roulade in the pot.
Oven or stovetop: Cook covered until fork tender, about 90 minutes.
Crock pot: Cook on low 4-6 hours.
Serve with noodles or mashed potatoes.