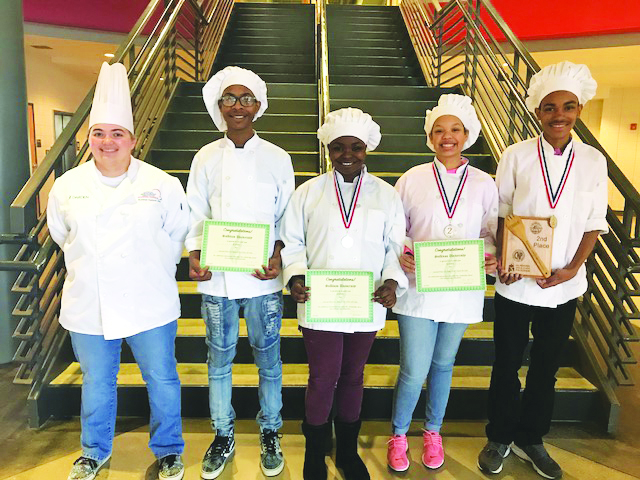 Four Opelika High School students in Judy Eldred’s Culinary I class placed second in Alabama’s first Junior Chef Competition March 7 at Carver High School in Montgomery.
The competition was hosted by the School Program Staff at the Alabama Department of Education Child Nutrition Program.
Mark Green, Takia Reid, Creston Canady and Maleah Upshaw each received a $10,000 scholarship to Sullivan University in Kentucky for their Hawaiian pulled pork and sweet potatoes.
“It feels awesome,” Green said. “This is our first time ever placing for Opelika, so we like feel as if we made history.”
Reid agreed, noting that it “felt really good” because they were the first of Eldred’s students who had placed that high in competition.
“I think what made us do so well is we kept reminding each other that it was more about just having fun instead of just competing,” Reid said.
To prepare for the competition, the students picked a recipe that aligned with specific guidelines and practiced it for about a week. Their recipe had to use a commodity food item their cafeteria receives, include at least two Alabama-grown products and follow cafeteria nutritional guidelines. Eldred said following the nutritional guidelines proved to be challenging for the students at first.
“When we started practicing it, [the students] realized there were some things they wanted to tweak and play with because some things tasted too strong, some things you couldn’t taste at all … and then they practiced plating, and we took their examples to the office, and we let some of our office staff look at it and give their opinion on what looks most appetizing to them,” Eldred explained.
The students also received some pointers on plating from Acre’s “Chef de Cuisine” Caleb Fischer.
“He came one of the days we were practicing, and he showed [the students] how to position things to make it a little more eye-appealing,” Eldred said.
According to Eldred, her students received mostly positive feedback from the judges, and “the only truly negative critique” was the result of the students choosing to plate their dish differently from the recipe they submitted.
Because of the primarily positive feedback, both Reid and Canady said they expected first place, but they were still proud to place second.
Some students, like Reid and Canady, did not cook at home much before joining the culinary class, but Reid said she cooks almost every day now. She enjoys making chicken dishes like alfredo and pot pie while Canady enjoys making omelets.
Green, on the other hand, used to help his mother cook homemade dishes when he was younger. Although this class was not his introduction to cooking, he said he has learned more about the culinary arts since taking Culinary I.
The students each said they have developed an interest in further pursuing culinary arts after high school since being in Culinary I and participating in the competition. Reid noted that since she is a senior, she has her mind set on something else, but culinary is still in the back of her mind as an option to pursue.
“I feel like I do enjoy cooking, so I’m definitely considering pursuing it in some type of fashion,” she said.
Mechanical engineering is on Canady’s radar, though he said he would still like to try culinary.
“I’m going to be joining [Culinary II] next year, definitely,” Canady said with a smile.
Green named a plethora of interests including journalism, creative writing, engineering and music, but one of his biggest goals is continuing his culinary education at the Culinary Institute of America in Hyde Park, New York.
“I’m just a young boy with dreams,” Green said.
Eldred said she would love to have more of her students compete again next year.
“We had a good time. The kids really enjoyed it,” Eldred said. “I think they did excellent.”