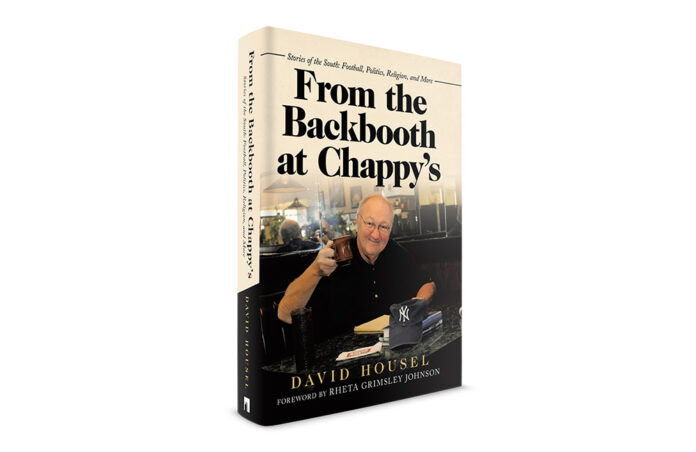 David Housel is a living chronicle of Auburn history. He is a son, husband, Christian, writer, former athletic director and friend. He also loves Chappy’s Deli.

Fittingly, his new book, “From the Backbooth at Chappy’s,” talks about all of that – and more.

Wearing a blue-striped golf shirt, auburn-emblazoned watch and thin-framed metallic glasses, the familiar Auburn figure settled into his silver-plaque-commemorated “backbooth” at the Chappy’s in Auburn to talk about his “most personal” book yet.

“I think this book reveals a different side of me,” said Housel.

The roots of “From the Backbooth at Chappy’s” began to grow in 2006 after Housel retired from a legendary career in the Auburn University Athletics Department.

“Susan [Housel’s wife] wanted me to do something to get out of the house,” he said. “So, I started going to Chappy’s to drink coffee and read the paper. Pretty soon, Kenny Howard would meet me here, and it just kind of grew from there.”

What started as a group of two to four people meeting once a week, evolved into a flock of 12 to 16 regular diners. On Monday, Housel gets two scrambled eggs with lean (not crispy) bacon, and a helium biscuit “so light and fluffy you have to snap it down to put butter and jelly on it”. He may get a parfait with granola on Tuesday. Wednesday is reserved for blueberry pancakes; Friday, a waffle. He takes his coffee black.

Before Housel retired, everything he wrote was through “orange and blue tint,” he said. “From the Backbooth at Chappy’s” shares a different perspective.

“Most people know me as strictly auburn,” he said. “There will be some people who are surprised by what is in there, maybe even angered by my thoughts on some things. But that’s okay, it’s a free country. But I do think this is the single most personal book I have ever done.”

The work, Housel’s seventh published book in total, had no origin point, he said. Each section, titled with its own superlative, comes from a story or memory from Housel’s life, with a certain randomness to each successive tale that will keep readers wondering what comes next. It reads just like a conversation in the backbooth, Housel said.

“I wrote all the content at different times, some back years ago, others recently. The book is put together not in chapters and not in sections, it’s just like sitting here in the backbooth – whatever subject comes up, we talk about it. There is no chronological order to it.”

The foreword of the book is written by Rheta Grimsley Johnson, a reporter for King Features Syndicate of New York and former journalism student of Housel’s whom he looks upon with the favor of a daughter or favorite niece. Johnson writes that this is Housel’s “best work” yet, saying “his thinking has evolved, which is how wisdom is won.”

She describes his writing as “black and white, with a sense of great wonderment and adventure, a guileless belief in truth, justice and childhood heroes.”

Others have more plainly said the book should be titled “Housel Unleashed.”

Overall, the book is a refreshing, raw and honest look at things that people seem hesitant to talk about these days. Things such as football, politics and religion are often intertwined in conversations between close friends, yes; but to groups with differing viewpoints, those subjects can – often too easily – strike a sensitive nerve. Housel said that should not be the case.

“This is how I feel; It’s what I think. We ought to be able to talk about it. If you agree, great. If you don’t agree, I respect your right to be different and have your own opinion.”

“From the Backbooth at Chappy’s” officially released Tuesday with a book signing at the Chappy’s in Auburn. Housel traveled to the Chappy’s in Montgomery on Wednesday and will be at the Prattville location today (Thursday).

The book is 359 pages in length. Housel believes there’s something in that mix that can appeal to anyone.