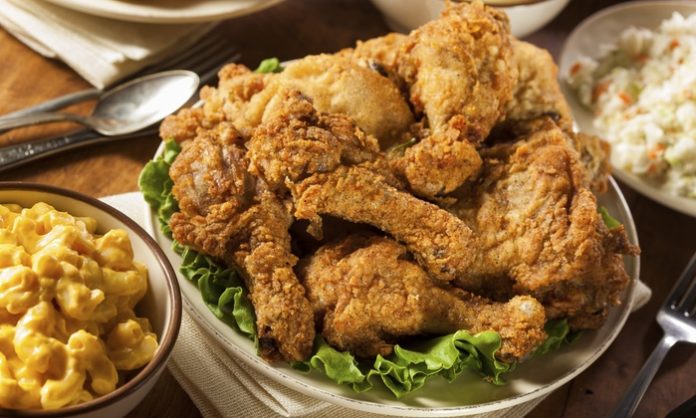 The South excelled in two things which the French deem essential to civilization: a code of manners and a native cuisine.
John Peale Bishop

Well, old John Peale may have been onto something there, but according to a couple of recent studies the cuisine part of our culture is leading us to an early grave.
Not long ago it was reported that anyone who wants diabetes should move South and start eating. Then the news filtered out that Men’s Health magazine had surveyed the health of men in 101 cities and guess what — Dixie didn’t do well. The first “southern” city to make the list was Raleigh, N.C. at #13, and you don’t find another until El Paso at #22, with Corpus Christi coming in at #28 and St. Petersburg, Fla. at #32.
Now I have a hard time making El Paso and Corpus Christi southern, and I always thought St. Petersburg was where Yankee retirees went to die, but never mind.
Texas contributed a couple more, Virginia Beach rolled in at #39, Tampa hit it at #48, followed by Lexington (#50), Hialeah, Fla. (#54), and Shreveport, La. (#55).
Notice something? All of these cities on the periphery of the Southern heartland, stuck out on the edge of the South Carolina-Georgia-Tennessee-Alabama-Mississippi corridor. So where are the towns of deep Dixie? Dragging in at the bottom, that’s where. Montgomery comes in at #74, Augusta, Ga. arrives at #87, Birmingham ranks at #89, Memphis at #97, Nashville at #98 and Atlanta comes in dead (no pun intended) last at #101. Mississippi cities ain’t even on the chart.
Now some of the reasons interior Southern cities aren’t healthy have to do with things like our inclination to do violence to each other, but the report pointed out that many of our health problems can be traced back to our eating habits.
And our eating habits can be traced back to our history. For about as long as there has been a South, culinarily speaking, a good part of the population has had to get by on the poorest cuts of meat and the most forlorn vegetables – neither of which tasted good or was good for us. So, given the choice between those alternatives – taste and health — we went for improving taste, and what we accomplished in that category has been nothing short of miraculous.
For proof I refer you to the late Ernest Matthew Mickler’s 1986 classic White Trash Cooking, a loving tribute to what southerners can do with traditional staples like fat pork, corn meal, molasses, garden greens, Ritz crackers, Cool Whip, Velveeta and whatever else happens to be handy. I have an autographed copy.
(Many of the same recipes can be found in any “soul-food” cookbook, which underscores the biracial character of the southern cuisine.)
This sort of cooking and this sort of eating has survived almost intact in the rural South or among rural Southerners who have made it to cities like Birmingham and Atlanta. But rather than take our eating habits as an indication of how isolated and unsophisticated the deep South remains, I contend that what we cook and consume is just one more bit of evidence of just how cosmopolitan southerners actually are.
Consider my buddy Jim, who just retired from teaching Southern history at one of our fine Southern Universities. As a historian Jim wrote about how the South’s legacy of war, defeat, occupation, industrial exploitation, poverty, homegrown fascism and such is more like the history of Europe than the rest of the United States. Well, Europeans read what he wrote and invited Jim to fly over and lecture at the University of Vienna. So he off he went.
Just to show the Viennese that Southerners were not as left out of the loop as some of our Yankee brethren claim, Jim carried cans of Vienna Sausage to pass around as favors. The sausages were a big hit, as was Jim’s explanation of how Vienna was properly pronounced (“Vi – eeee – nah”).
Now I don’t know, or really care, how Vienna would rank among healthy cities in Europe. And from what Jim tells me, the Viennese don’t know or care either. They enjoy food fixed the way they like it fixed.
So do Southerners. Frying remains the preparation of choice for many of us. Our barbeque has more regional variation than French wine. And while Californians go on about the way they experiment with ingredients and approaches, we can match ‘em with dishes like “Uncle Willie’s Swamp Cabbage Stew,” “Freda’s Five-Can Casserole,” and a “Kiss Me Not Sandwich” (White Trash Cooking, pp. 11, 41, 73).
As for discovering that most of the cities in the Southern heartland are not healthy places to live well, if you can’t have it all, I’d rather have mine with “Ham-Lama Salad” (p. 65) and some “Soda Cracker Pie” (p. 106), thank you very much.
Harvey H. (“Hardy”) Jackson is Professor Emeritus of History at Jacksonville State University. He can be reached at hjackson@cableone.net.

The Death Of The Abide

Opelika to Participate in National Night Out

SnapStand Photobooth Takes Photography to the Next Level