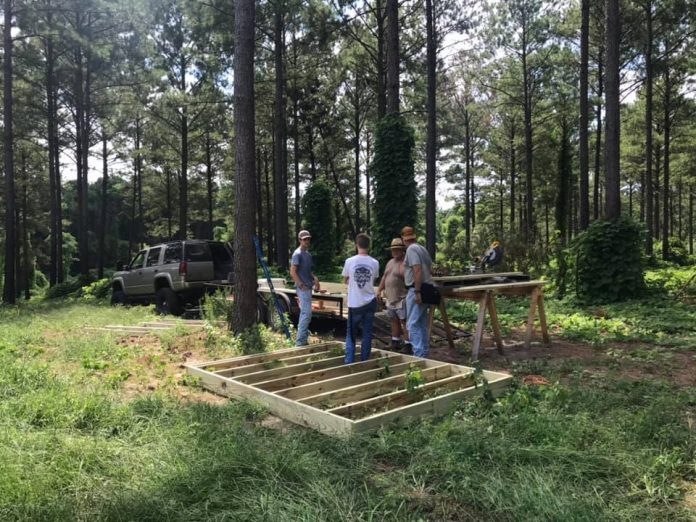 Through a recent partnership formed between Jamie Popwell of Flags for Vets and Ricky Spratlin of Relentless Whitetails in the Tuskegee area, disabled veterans who have a passion for the outdoors will be able to hunt from two handicap-accessible shooting blinds this fall.
Construction on the projects is slated for completion in the next few weeks and open to veterans in late September to early October for hog season. By deer season, Spratlin will have the preserve well-stocked with whitetails.
According to Popwell, he and Spratlin met last year. After hearing of Spratlin’s idea for the blinds, he said he agreed to help make the idea a reality.
With assistance from the staff at the Tiger Town Home Depot location, Popwell was able to secure a grant that covered the majority of the more than $17,000 in materials needed to complete the project.
“We feel like this idea is just a way to give back. I told Ricky that there’s always (veterans) out there who are sitting and looking outside their window, saying to themselves, I wish could do this or that,” Popwell said. “This is going to be an opportunity for them to feel more normal and that they can go hunting again and enjoy the thrill of dropping a white-tailed deer.”
Later in the fall, Popwell will be releasing application forms which veterans can use to sign up and participate.
With the construction costs covered, Popwell added that he is searching for corporate sponsors, particularly for donations of ammunition or firearms that can be later gifted to veterans after a successful hunt.
For more information, call Popwell at 817-757-0691, like and follow the nonprofit’s social media pages or visit www.flagsforvets.us.