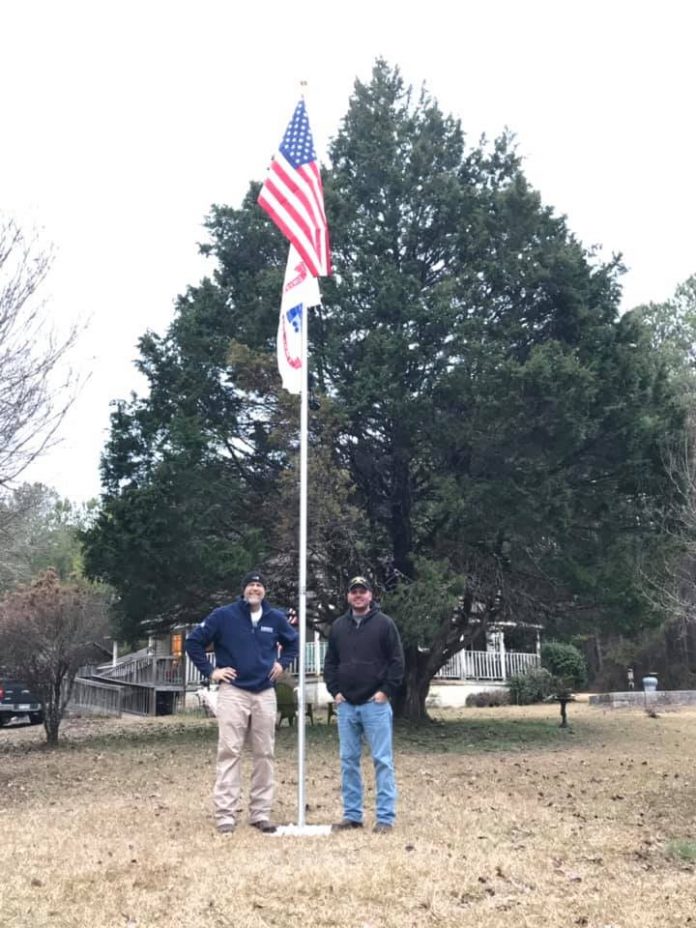 More than 300 flagpoles have been installed for veterans nationwide the last two years through the efforts of Flags for Vets, a local nonprofit dedicated to honoring their service and sacrifice.
Started in January 2017 by Opelika native Jamie Popwell, Flags for Vets’ concept has received solid support nationwide, with chapters planned to open soon in New Mexico and West Virginia.
Among the latest three installations was U.S. Army and WWII veteran Thomas Bamberg, the 300th flagpole recipient; U.S. Air Force (Ret.) Master Sgt. Roger Tate and Opelika native and stand-up comedian Jody Fuller.
In a Flags for Vets Facebook post Tuesday, Popwell ran through Fuller’s years of service and accomplishments:
“Major (Jody) Fuller began his service as an enlisted soldier. He entered in August 1992 and spent four years enlisted as a medic working at the Army Regional Medical Center in Landstuhl, Germany and later with the 1st of the 17th ART stationed at Fort Sill. He was discharged as an E-4 (Specialist) but re-entered the Army, reporting to Officer Candidate School in September 2002 and was commissioned as a 2nd Lt. assigned to the 296th Brigade Support Battalion (3rd Brigade/2nd ID). It was the first Stryker unit in the Army. He deployed the first of three times to Iraq in Samara and Mosul in 2003-04. He left active duty and joined the Alabama National Guard in 2006 and was deployed a second time to Iraq with the 1203rd Engineer Battalion from 2007-08 and again in 2010-11 with 111th Ordinance Group in Opelika. He was discharged in 2017.
“He has earned a plethora of medals and commendations throughout his career including the Meritorious Service, Defense Service and Army Commendation medals as well as numerous campaign ribbons for his support of the War on Terror.”
For more information about Flags for Vets, visit www.flagsforvets.us.