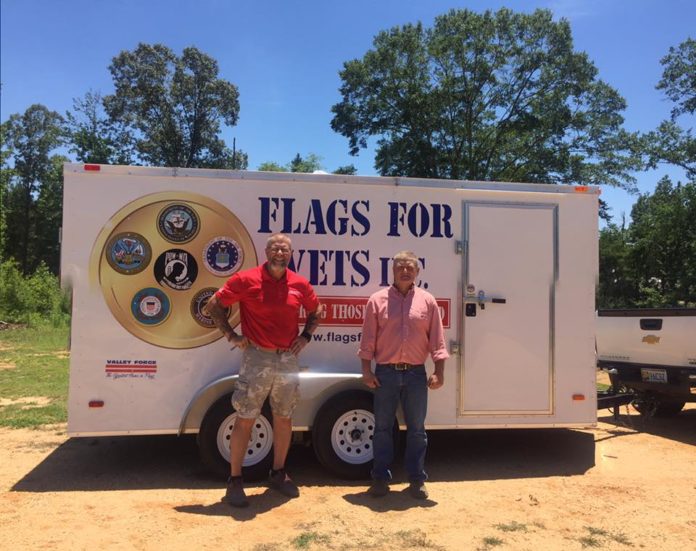 Flags for Vets, a non-profit organization founded by Opelika native and former U.S. Marine Jamie Popwell, is dedicated to honoring the service of America’s military veterans by placing a flagpole in their front yard.
“My mission statement in a nutshell is this: I just want to recognize those who have served and pay it forward to those that did so much and sacrificed greatly for our country,” Popwell said.
The idea behind Flags for Vets started in late January when Popwell installed a flagpole in his father’s front yard, and shared it on social media, asking his Facebook friends if they knew of any local veterans who would like the same done for them. He said the response were overwhelming.
“I started getting hit up with Facebook messages, phone calls and texts saying, ‘I got a veteran here,’ or ‘I got a veteran there.’ One thing led to another, and I got to realizing, ‘is this my calling now?’” Popwell said. “After a lot of prayer, I felt God tugging, I felt that pull that this was exactly where I needed to be right now.”
Since February, Popwell has erected 60-plus flagpoles for veterans in Alabama, Georgia and Florida, and even as far away as New Mexico.
Veterans from any branch or years of service are eligible for flags, according to Popwell. With help from family, friends, anonymous donors or sponsors, he can assemble and complete a flagpole installation for $125, at no charge to the veteran.
Popwell said the greatest takeaway for him is the opportunity to meet and talk with the veterans, as well as see their reactions after he finishes a project.
“Doing this, for me it’s like therapy … I don’t want it to be about me showing up, and an hour and a half later, they got a flag, and I thank them and tell them to have a nice day. I don’t care how busy I am, or how many installs I gotta do, every single person deserves my time and my attention,” Popwell said.
Along with help from his wife Dina, helper Brantley Cargill and his wife Molly, Allie Chapman and Mike Delk, Popwell said they can maintain the local demand, but he has plans of expanding the organization nationally by establishing chapters of Flags for Vets in states including Utah and Texas.
“If I’m correct about this, this is going to be something that’s really, really big. My goal is to have chapters all over the country, and there’ll be veterans honored by this chapter or that chapter,” Popwell said. “There are 44 million veterans in the country right now, but can I get to all of them? No. I’m being realistic that that will probably never happen, but it definitely won’t be from a lack of trying.”
Popwell said they are in the process of finding a storefront where they can sell Flags for Vets merchandise to help with donations and cover operating expenses.
For more information on Flags for Vets, follow them on Facebook or Instagram, or visit their website, www.donateflagsforvets.com. Donations or sponsorships can be done through a special account at Auburn Bank in Auburn, or a Paypal account linked to Popwell’s email address at flagsforvets1@gmail.com.