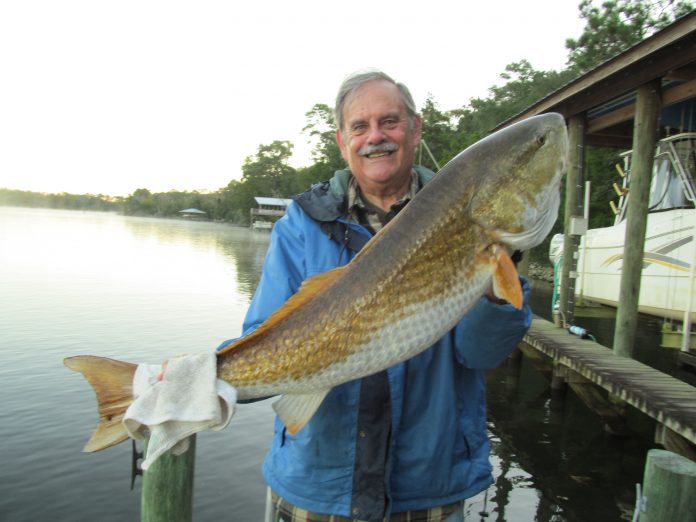 Alabama is full of rivers and streams. Those rivers and streams are full of fish.
Though I grew up between the Alabama and the Tombigbee, my favorite of them all is the Coosa. It is also the one that man has changed the most.
The Coosa is also formed in Georgia, but just barely. It begins where the Oostanaula and Etowah meet beneath the hills of Rome, and from there it slowly flows 100 river miles on a course marked by so many twists and turns and bends that old men in old times believed it was trying to touch every farm in the valley.
At least it was like that before the dams.
And before the dams, at that 100-mile mark the Coosa changed– abruptly. There the land fell away and the water rushed over reefs, shoals, and rapids for another 100 river miles. Only this time the course was straight, pressed in by hills and bluffs on either side, until near its end the river roared over Staircase Falls, just above where Wetumpka would be built, and into the pool below.
So, back then the Coosa was two rivers – one slow and steady, one swift and wild. And folks fished them both. The Indians were first. They piled rocks into “V” shaped formations with the point upstream so spawning fish were forced into the narrows and caught in baskets and nets. Long after the Indians were gone, these “weirs” remained and names like “Fish-trap shoals” were still used.
Early settlers fished as much for the pot as for pleasure, and when settlements became market centers, they fished for profit. For them the stream was an inexhaustible resource and they used it. One account told of a man “coming up from the river with many fine large fish . . . of which it was said upwards of 500 were caught, in a single haul, by a seine, or net.” Around 1850 a fisherman named Joe Skinner reported that he took over 2,300 from his traps in one day – but you know that a fisherman is inclined to exaggerate, a bit, and lie the rest of the time.
Because the profit margin for Coosa commercial fishing was small, that occupation did not attract the ambitious. As a result, over the years and into the 20th century, the river was the refuge for those just trying to get by, those whose lack of get-up-and-go (or abundance of bad luck) made the river their only option.
You don’t find them too often in history books. They seldom appear in the statistics of the region. Most lived and died anonymously, or would have had not the Great Depression come along and the Federal Government, in an effort to employ people who were all but unemployable – like writers – set up a program that sent folks out to observe, interview, and preserve the lives of the likes of river folks.
They were, as one writer put it, “human driftwood,”
people who turned “to the rivers and a bare existence when the mines, the steel plants, and the textile mills” closed or cut back. They lived in clapped together houses, just above the high-water line, seined carp and bream, ran trotlines for catfish, jug-fished for drum and buffalo, and took what they didn’t eat to town to sell. And with what they got they bought “sowbelly an’bread,” “canned stuff an’ side meat,” “hard-rolled” cigarettes, snuff, or “whiskey and a roaring drunk.”
It was a hard life, but it brought out the philosopher in some of them. Bob Curtis, fisherman, bootlegger, and sometimes sharecropper, was one. “The Lord keers for his own,” he observed. “Yuh know, th’ good Lord was int’rusted in fishermen.”
Curtis and his kind were there when power company dams changed the river from roaring rapids to elongated lakes. Starting before the First World War and finishing up in the 1960s, Alabama Power flooded the reefs and shoals where rivermen trapped fish. But the rivermen adapted.
When the dam gates closed and the river below it went dry, fishermen became scavengers as they scooped up fish trapped in pools left by receding water. Then, when the lake filled and the river flowed again in its bed, they fished both sides of the dam – upstream for lake fish, downstream in the swift runoff for the fish that had always been their staple.
Today the lake culture has taken over. Following the Coosa from the Georgia line to Wetumpka, there are only a few stretches where you can get a feel for what the river once was. But that doesn’t seem to bother fishermen.
No longer a refuge for “human driftwood,” the lakes are lined with homes that would not be out of place in upscale suburbs and with weekend cottages that could easily grace the pages of Architectural Digest. And fishermen take to the water in bass boats that cost almost as much and can go almost as fast as the car or truck they leave parked on the bank. Gone too are the trotlines, the fishtraps, and the seines. Carefully calibrated reels, graphite rods, scientifically designed lures, and sonar fishfinders are there instead.
And today there is money to be made fishing. Tournaments attract sportsmen from all over and the prizes are well worth the effort and expense. But still, if you slow your boat down and look up in the spackled shadows of the coves and sloughs you can see what used to be, sitting on the bank or in a paddle boat, cane pole and cork and a hook with a worm on it, waiting for a nibble and a bite.
Just fishing. Harvey H. (“Hardy”) Jackson is Eminent Scholar in History at Jacksonville State University. He can be reached at hjackson@cableone.net.