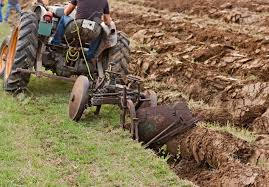 By Bob Sanders
I was over at one of my tractor-selling buddies’ place the other day just to wlk around and look at some of the latest equipment. “Come on out to the back,” he said, “and take a look at the new little garden tractor we got in the other day.”
I tagged along behind as he led the way. We picked our way among the laid-out innards of different tractors and soon emerged into the sunlight at the backside of the shop, And there stood the beatin’est machine I nearly ever saw. It was a tractor, I guess you’d say, but it was one grown to such proportions that the term seemed  quite inadequate to properly describe it.
Law me! It sat there on eight huge tires, each of which probably cost as much as a whole Farmall Cub cost when it proceeded to take the place of two small mules on many a farm in our part of the country shortly after World War II. Oh, it towered into the sky, with the air-conditioned cab setting up over the massive frame and hood that jutted pugnaciously out in front of the forward-most wheels. A smokestack stuck up on each side of the hood, big business-like smokestacks, none of your little soda straw affairs.
I walked all around the thang, and under it. I felt a little of the trepidation and awe that brother Jack must have felt when he’d run and hide in the house whenever the big road grading machine would come huffing and puffing and snorting and growling up the road.
I thought to myself how it would have been to own one of those monsters back home in my hoeing and plowing days. I mean, we thought the epitome of agricultural engineering achievement had just about been reached that time when Uncle Kelley hired Mr. Cook to break up a little land for him. Just break it up. No one even entertained the idea that someday people might actually cultivate crops with a tractor. We all stood around wonderstruck, as the cleated steel wheels pulled the discs through the sod. Such a wide swath. What had the world come to?
Understand, farming in the hill country was somewhat different from farming in the broad, level expanses of the Black Belt or the Prairie (which, for some unknown reason, is what Mississippians call the same rich belt of black dirt when it gets over into their state, or the Imperial Valley, or the Plains of the midwest. We considered the Ridge Field to be one of our big fields, and, for a fact, when a body was out there with a hoe with orders to chop cotton or thin the corn, it did seem huge. It was in the neighborhood of five acres. Same with the field across from Aunt Lessie’s. Maybe four acres, and the field across from Jettie Lee Merchant’s that went from the sandy little basin down in the bottom terrace up to the red clay on the top of the knob, about the same,
You’d have to do some wholesale clearing just to make a road big enough toget this space-age-looking critter to the fields. Andthe cow itch vine-covered gravel pit that passed for a patch still farther down the hill across from Aunt Lessie’s wouldn’t have been even big enough for it to turn around.
The fellow at the tractor place was telling me how a farmer could hitch a whole bunch of tillers to this machine and sock them down about as deep as your arm is long and it’d cruise smartly along without even puffing hard. I don’t doubt it. I came home and got out my Progressive Farmer and looked at the ads and discovered that its engine delivers 335 horsepower. Lord help us. Now I don’t know if that’s 335 Clydesdale power or 335, say, old Doc power.
Old Doc was the sharp-backed, raw-boned old horse we had when I was about three. When you sat on him, your backside made contact with nothing but his backbone. It was like riding a buggy axle. But anyway, 335 horsepower. You figure a horsepower is more than a mulepower at any rate, and since our mules were rather small mules, and you multiply accordingly. The mind conjures up visions of locust-like swarms of mules pounding over the old place.
But, Lord, wouldn’t I have been a dude if I’d had a machine like that back in those days. “Where you been workin’ today?” somebody would ask as I’d come driving in, still rested and fresh, my deodorant not even strained, sitting high up there in my climate-controlled flight deck.
“Oh, I plowed up Pickens County today,” I’d say. “Tomorrow I think I’ll get Fayette and Marion, and maybe over into Mississippi a little bit, if I don’t have trouble with this blasted ice cube maker. They just don’t build things the way they used to.”
Fellow told me I could have one of those tractors for only $85,000.
I told him that was probably a good bargain, but I’d have to think about it for a while; I wasn’t too sure how it would negotiate all those little short rows in that second terrace in the Ridge Field,