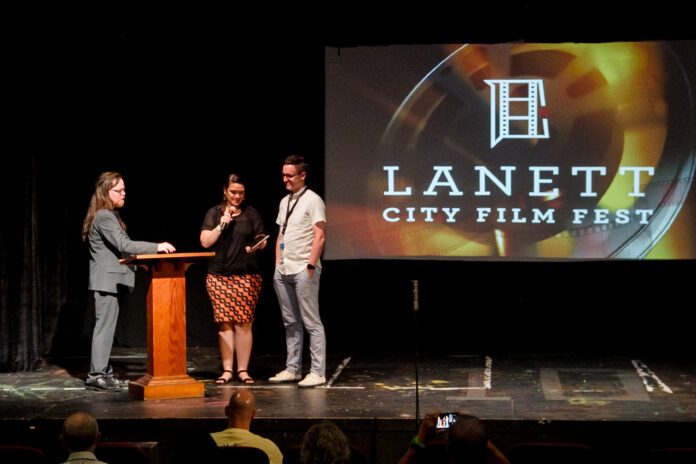 The Fourth Annual Lanett City Film Festival will take place online from Aug. 10through Aug. 15.  With the expansion of festival hours, more independent films are available to the public than ever before and this year’s location makes the event open to anyone with an internet connection.

“As always, the health and well-being of our citizens is a priority for the City of Lanett,” said Lanett Mayor Kyle McCoy. “Moving the film festival online allows us to continue promoting the creativity and talents of film artists, while ensuring that attendees can safely enjoy the entertainment presented.”

The select films that will be presented during the festival include narrative shorts, brilliant documentaries, stunning student films and heart-warming features. Trailers and descriptions of festival films are available at www.lanettfilmfestival.com, in order to help guests easily select the showings that hold the most interest for them.

“Even though our festival is virtual this year, we have worked diligently to ensure the best experience possible for everyone involved and, by utilizing live-streaming, we are allowing an even greater interaction between our guests and artists,” said Festival Coordinator Eric Wright.

Films entered into the festival are eligible for multiple awards, with the “City of Lanett” Award to be voted on by the audience.  Categories include the Best Feature Film, the Best Short Film, Best Documentary, Best Documentary Short, Best Actor and Best Actress.

Filmmaker Joshua Hooks, a graduate of Valley High in 1998, will have his film shown on Aug. 13 at 8:30 p.m. Global Caper-A Self Taped Movie, depicts actors from across the globe, joining together in this lighthearted, tasteful and fun Noir-style film.

Global Caper steers away from being “cinematic” and replaces it with a steady dose of new characters and dialogue that would be common in the twilight zone Covid-19 pandemic era. Every scene was shot by actors in self-isolation. Actors and actresses have credits from productions such as The Young and the Restless, It’s Always Sunny in Philadelphia, Agents of Shield, Venom, Walking Dead, Outerbanks, Veep and more.  This film is showing at 8:30 p.m. on Aug. 13 with a question and answer session with Hooks at 8 p.m.

There will be a Q&A with actor Ade McCormack, from Blood Diamond, Lost, Heroes, Gilmore Girls, Netflix’s Castlevania (Isaac) and voice actor on video games including Call of Duty and World of Warcraft, who brings his film, The German King, to the festival this year.

Set in 1914 at the start of World War I, The German King is the unbelievable true story of King Rudolf Douala Manga Bell; a German raised African prince who becomes king after his father’s death. Upon returning home to Cameroon, he sees his people being subjugated and enslaved under Kaiser Wilhelmʼs II oppressive colonial rule. He realizes the only way to put an end to his peoples’ suffering, is to lead a rebellion against the man he once considered his brother.

Producer, writer and actor Daniel Moya, who won best feature film during the festival’s first year is returning with another one of his films, Scroll Back. Daniel who is known for his work as writer and producer on Killer Kate! will be doing a Q&A on Wednesday after his film.

The family-friendly film, Jingle the Dog: A Christmas Story will be playing at noon on Aug. 15 and award-winning filmmaker, Theo Moore II, has his recent documentary, Hobson City: From Peril to Promise, will be shown at 1 p.m. on Aug. 15, followed by an interview with Moore.

The festival runs Aug. 10 through Aug. 14 from 3 to 10 p.m., with additional hours on Aug. 15, from 10 a.m. to 10 p.m.  The final Awards Ceremony, wrapping up this week-long event will be available to watch live at lanettfilmfestival.com or by following the link on the festival’s Facebook page at https://www.facebook.com/lanettfilmfest.

Tickets are available for the full week for only $10.  For more information, to purchase tickets or to view trailers from the films, visit www.LANETTFILMFESTIVAL.com.