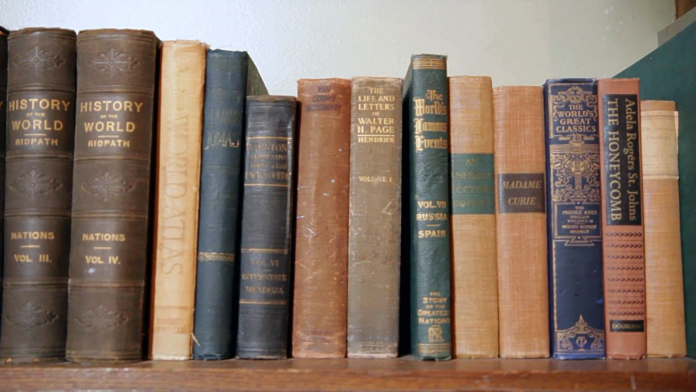 By Greg Markley
For the
Opelika Observer

Thomas Jefferson said, “I cannot live without books.” But most students today trade in their books for cash as soon as the semester ends. Students at public schools like Auburn University and Southern Union often need the money they can get from selling back textbooks to campus bookstores or students. Still, keeping one or two books every so often is a good idea. This article will present several reasons why.
Digital reading devices such as Kindle present a technology-driven bonanza. Saving a book opens up plenty of space on your home bookcase, yet you have easy access to books you love. You can have those e-books and can retrieve them later to read at will. Sony’s Reader promises “A Library of Books at Your Fingertips.” The issue is not means-keeping books the old-fashioned method or the high-tech way—but rather that some are indeed kept.
Many people these days wonder why others keep so many books. In fact, many say, “Oh, I just throw it out.” Many people treat books like bonbons: Delicious but ephemeral. That is further evidence of our throwaway culture: Amid a situation in 2018 when just three-fourths of Americans read just one book a year (Pew Research notes that does not include digital versions.) A person need not be a hoarder to find good reason to keep cherished books at home.
What if it is transformational? Wouldn’t it be special to keep Dian Fosse’s “Gorillas in the Mist,” if it led you to become a pro-animals activist, Woodward and Bernstein’s “The President’s Men” if it turned you on to journalism, or “Beloved” by Toni Morrison if it fascinates you by its aspects of family relationships and the human toll of slavery? It doesn’t have to be authored by William Shakespeare or even J.K. Rowling to be worth saving.
Do stark but effective phrases from Ernest Hemingway make his books a keeper? Do you want the descriptive chapters in Stephen King or John LeCarre novels nearby to scare you or inspire you? Having easy access to key passages is not a waste of shelf space. A famous cartoon shows a couple touring a house that is for sale, and the woman, in front of a floor–to-ceiling bookcase, says “What kind of people lived here?”
The answer: people who realized keeping books is not a waste of space, or a pretentious display. It was with pride that certain books, not all, were worth keeping for them. People who love books enough to keep most after reading may take this idea too far. If guests cannot navigate their way across your living room floor because boxes of books impede, there is a problem. Maybe you should take books, even those by Jack Kerouac and go “On the Road.”
Few doubt that a child with access to books at home gets added stimulation that makes their grades and horizons rise. Reading can build self-confidence and fosters creativity and inspiration. A 2010 study by professors at the University of Nevada-Reno, for example, found books in the home helped children succeed whether the parents were college graduates or barely literate. For adults, turning to a dog- eared copy of a book is akin to hugging an old friend.
Greg Markley is a longtime Lee County journalist and a former member of the Executive Board of the county’s Literacy Coalition. He has been an avid reader since since he was eight years old.