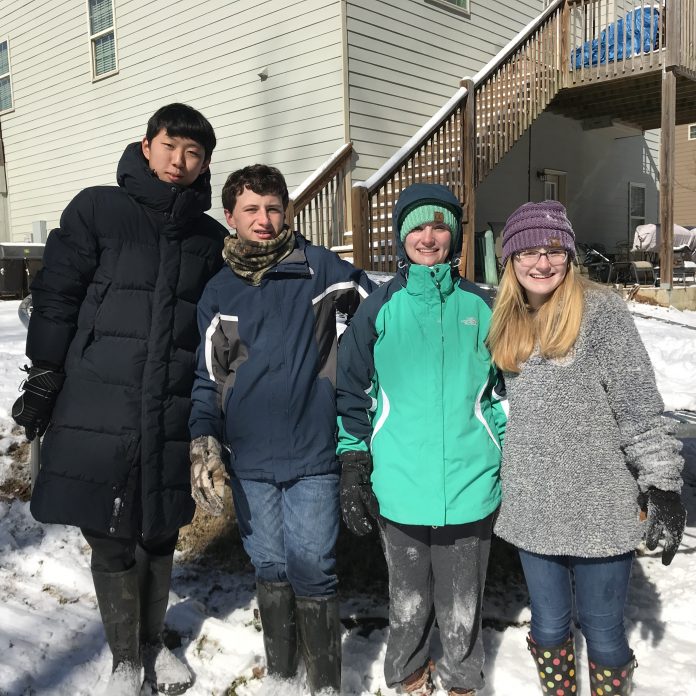 The Oregon-based nonprofit Education, Travel & Culture is an educational exchange organization that brings in bright students from around the world and places them in schools across the United States.
According to their website, ETC’s main purpose is “to promote international understanding and goodwill by providing high quality educational and cultural exchange programs in the United States and abroad.”
Four international students are here in Lee County schools this year through ETC, one of which is South Korean native Inseung Choi.
ETC students like Inseung live with a host family during their time in the U.S. and receive monthly visits from their local coordinator to monitor their grades and overall wellbeing.
According to local coordinator Lauren Lathum, ETC requires students to maintain a ‘C’ or above in all their classes. If they fall below, ETC starts looking into finding a tutor, though this is not a common issue.
“The ETC students—they’re always, like, the best of the best from their countries, so we almost never have problems with students that fall below on their grades,” Lathum said.
When she is not working as a local coordinator for ETC, Lathum teaches English at Smiths Station High School. When students were looking to be placed in Lee County schools, Lathum went to SSHS’s foreign language department to see if any of the teachers would be interested in hosting an exchange student.
Spanish teacher David Gregory stepped up to the plate, and Inseung will be living with him and his family until December when he returns to his hometown of Muan-gun, Jeollanam-do, Korea.
“We wanted to host him because we wanted our children to learn about and experience another culture, and to have somebody live with us—and we knew we were probably never going to visit [Asia]—we wanted him to also experience our family and who we were, and so it was a family decision, and everybody kind of just pitches in to make it work.”
Gregory’s three children—Brighton, Braden and Brylee—attend Opelika city schools, but since both Auburn and Opelika High Schools adopted policies in 2001 that do not allow foreign exchange students Inseung attends Smiths Station High School with Gregory every weekday as a 10th-grader.
Inseung’s class schedule includes graphic arts, English, geometry, environmental science, business technology, P.E. and U.S. history. In his letter to the Gregory family before his arrival, Inseung said his hobby is playing sports, and he claims P.E. as his favorite class. He also said he enjoys U.S. history and has not studied it before.
“He’s required by ETC to take an English class and a history class. Everything else is optional,” Gregory said. “He’s never studied anything about U.S. history, so that’s been a challenge, but he’s done good with his other classes—‘A’ student, something like that.”
Gregory also said students and teachers have been good about including Inseung, even having him give a presentation for their World Language Club in which he demonstrated writing in Korean and showed the audience hanbok, a name for traditional Korean clothing.
“Students at school know who he is … and so they include him in activities and things like that. They make him feel welcomed, so they’re excited having him at our school, so it’s worked out good,” Gregory said.
Inseung has even been invited to the prom.
During the summer, Inseung will attend an ETC-sponsored camp in North Carolina for three weeks with other students in the program to learn and enjoy fellowship. Gregory mentioned that he also hopes to take Inseung along on family vacations to Disney World and to visit family in Texas.
Inseung also mentioned in his letter that he is “a huge NBA fan,” so Gregory said he and his family hope to take him to an NBA game in Atlanta later this year.
Since arriving in January, Inseung has enjoyed playing sports with the Gregory children and playing games like chess and dominoes. They also had fun playing in the snow one day. However, he has also faced challenges with linguistic and cultural differences.
“I want to speak in English naturally,” Inseung said. “They always have (different) greetings (in America)—in South Korea it’s just ‘hello’ and talking.”
American food has also been a high point of Inseung’s experiences in America, and he notes barbecue sandwiches and hamburgers as some of his favorites.
“In South Korea, many parents don’t want to eat instant food, like fast food, so I can eat a lot of fast food (in America), so [I’m] happy,” he explained.
Lathum said she is impressed with how far Inseung has come in his English skills.
“Inseung had a hard time when he first came here, but he picked up on it really quickly. When he first came here, he was having to talk to us like with gestures and pictures, so it’s amazing that these kids, they’re really awesome kids,” she said.
For Lathum, one of the most rewarding aspects of being a local coordinator for ETC is that she gets to meet students from all over—other exchange students in Lee County hail from Italy and Germany—and experience their culture through them.
“I have never been out of the country before, so for me, it’s a great cultural experience getting to be introduced to new students from around the world,” Lathum said. “It almost gives you a feeling of being able to go there yourself … it just makes you have a greater sense of compassion for people and just a greater understanding of the world in general.”
To learn more about ETC, visit www.edutrav.org.