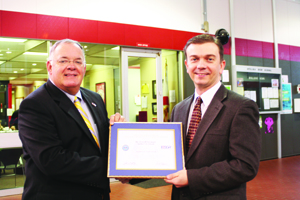 Wendell McLain, of Employer Support of the Guard and Reserve (ESGR), recently presented Dr. Farrell Seymore, OHS Principal, with a certificate recognizing Opelika High School and the Opelika City Schools as a Patriotic Employer for “contributing to national security and protecting liberty and freedom by supporting employee participation in America’s National Guard and Reserve Force.”OHS was nominated by Antonio Griffin, Army National Guard Captain, for the support he received during each mission and also for the support in his job teaching social studies at OHS.“We are extremely honored to have received this award, and appreciate Mr. Griffin nominating us,” said Dr. Seymore.

Griffin was deployed multiple times while employed by the Opelika City Schools. Griffin is currently employed at Abbeville High School.