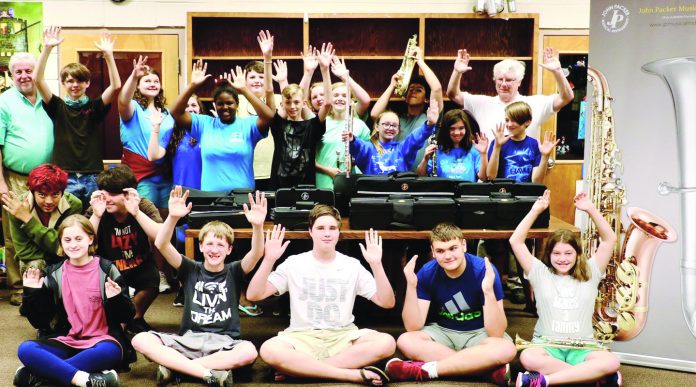 A simple misunderstanding of American geography led to a wonderful gift for members of the Sanford Middle School Band Program.
In the days following the March 3 tornadoes, Danny Maley, owner of O’Malley Music Instruments in Douglas, Georgia received an email from Rob Hanson, company director John Packer Music in Somerset, England, concerned that they may have been affected by the storms.
Maley, longtime friends with Beauregard High and Sanford Middle school Band Director John Hillsman, saw it as an opportunity to pass along something good for a community that was hurting.
“After seeing John and his band students rallying together to help those in need on the national news, I called to see if there was anything we could do. John, always thinking ahead, mentioned that because so many parents were having to completely rebuild lives and property that perhaps having some instruments on hand would insure that a child wanting to start middle school band would be able to do so,” Maley said. “This gave me a fantastic opportunity to pass along the idea of supplying instruments to under funded schools ravaged by the tornado. Without skipping a beat, Rob said ‘count me in!'”
On Beauregard’s field day at the end of the school year, O’Malley employee and Hillsman’s former colleague from Jefferson Davis High School in Hazelhurst, Georgia traveled to make the donation on behalf of his company and John Packer. Pictured above is the receiving of the donations of two alto saxophones, two clarinets, two flutes, two trombones and two trumpets each to Hillsman and members of Sanford’s band program.