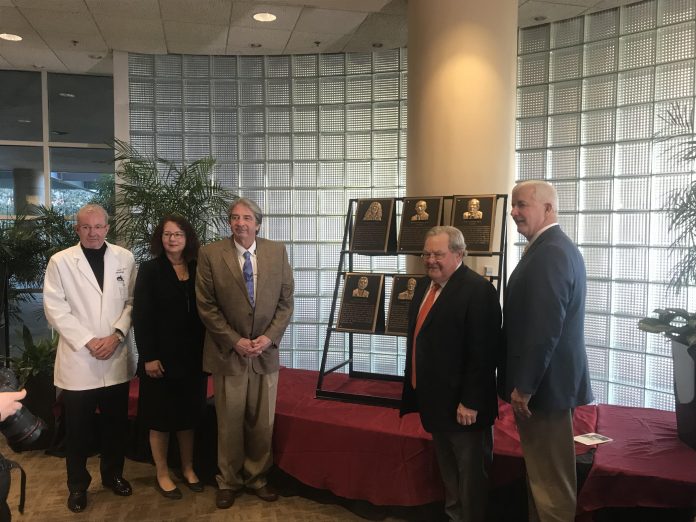 Administrators and representatives with East Alabama Medical Center held the 2018 Leaders of Distinction Ceremony last Thursday in the hospital’s main lobby.
The ceremony honored six physicians who have dedicated more than 30 years of service to EAMC. The honorees included Dr. Gwen Cooper, Dr. William Golden, the late Dr. Allen Graves, Dr. J. Stephen Lock, Dr. John McArthur and Dr. George Purves.
“All of these honorees were special,” said Hospital President and CEO Terry Andrus. “We have the late Dr. Graves who began infectious disease, our two anesthesiologists (Drs. Purves and McArthur) who brought that department up to a special level, our two OBGYNs (Drs. Cooper and Golden) greatly improved that service, and Dr. Locke improving our surgical capacity. They all played key roles in bringing services that we didn’t have or improving the services we did have.”
A surprise dedication was also presented to Andrus to recognize his 35 years of dedication to EAMC before he retires from his position on Sept. 30.
“It is really kind of special because obviously we have recognized lots of wonderful people here tonight and in the past. And to be included with them is great and I am thankful,” Andrus said.
This brings a total of 75 inductees to be recognized since the ceremony’s creation in 2008.
Each honoree, including Andrus, received a plaque that will remain on display in EAMC Main Lobby until April 9.
Afterward, each plaque will be placed on the floor in which each physician worked.
During a ceremony on March 22, 17 employees were honored as part of the ‘Faces of Dedication’ ceremony. These employees (with the occasional exception) have served EAMC for at least 35 years.