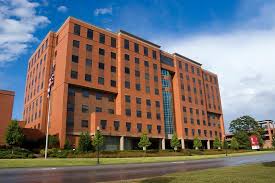 With the addition of East Alabama Medical Center’s (EAMC) first neonatologist, Audra Prince, M.D.,the hospital now offers patients a seven-bed Level II nursery with neonatology services. A Level II nursery is a special care nursery organized with the equipment and personnel to care for infants born at 32 weeks gestation that weigh more than 1,500 grams (about 3.3 pounds).
Prince is the first neonatologist to join EAMC’s Womens and Childrens services team. She is board certified in neonatal-perinatal medicine, received her medical degree from the University of Arkansas and completed both her fellowship in neonatology and her residency in pediatrics at Arkansas Children’s Hospital.
Prince is originally from Opelika, and was born at Lee County Hospital before it became East Alabama Medical Center.
Before Prince began practicing at EAMC, the medical staff stabilized premature babies before they were transferred to an out-of-town NICU. Now babies who are born at 32 weeks gestation and older are able to stay at EAMC as they grow and improve to a Level of health that is proper for discharge.
“Having a baby transferred to a NICU out of town is extremely stressful for the family,” said Executive Director of Womens and Childrens services at EAMC Rosemary Cummings.
“Typically, while the mother is recovering from childbirth, someone else will have to leave her side to travel with the baby to a NICU hours away, which is a challenge. Breastfeeding is also extremely challenging in these circumstances.”
Not only does Prince bring a new Level of expertise to the Level II nursery at EAMC, she is also able to provide stabilization and the first steps of special care for babies who will be transferred to a NICU.
“Knowing that we now have a neonatologist on staff can reassure parents that we have even more advanced skills in our Mother/Baby Unit that can enhance what our pediatricians are already doing,” Cummings said.
“This new specialty is greatly enhancing the already robust Women and Children Services that we offer,” said EAMC Vice President and Chief Nursing Officer Jane Fullum.
“With more than 2,000 babies being born each year at EAMC, adding a wealth of knowledge that Dr. Prince brings is helping us to better meet the needs of our community, which is one of the fastest growing communities in the Southeast.”
MALDI-TOF
Technology
East Alabama Medical Center (EAMC) recently began using a new technology that allows the rapid identification of bacterial organisms. This new equipment, called Matrix Assisted Laser Desorption/Ionization Time of Flight (MALDI-TOF), can process and identify more than 500 types of bacterial infections in a matter of minutes.
“As an infectious disease specialist, I can tell you this is a game-changer,” said Ricardo Maldonado, M.D. of East Alabama Infectious Disease. “My job is to treat our most vulnerable and sickest patients who are mostly dealing with life-threatening infections, and time is of the essence. With traditional methods that we have used for decades, it took between three-to-five days to fully know the identification of responsible bacteria that makes our patients sick.”
Maldonado said MALDI-TOF will identify these bacteria quicker.
“The impact is more than significant and, in many cases, will be lifesaving. The same can be said for my job as the medical director of the Antimicrobial Stewardship Program at EAMC. Our team will figure out organisms more rapidly and allow us to make faster antibiotic recommendations to our colleagues, or in other cases, avoid using unnecessary antibiotics, preventing the development of resistance as well as undesirable side effects,” Maldonado said.
Patients dealing with serious infections depend on timely and effective antibiotic therapy.
Microbiology Supervisor at EAMC Jeff Payne said “the MALDI-TOF will help our Microbiology Laboratory get the bacteria identification very quickly. At the earliest signs of bacterial growth, we can use this technology to identify these bacteria in a matter of minutes.”
Antibiotic resistance is one of the biggest health challenges of our time. This has been driven by the largely unnecessary use of antibiotics.
“Identifying bacteria rapidly is so important,” said EAMC Antimicrobial Stewardship Pharmacist Darrell Childress. “The faster we can identify bacteria, the faster we can begin a more specific and effective treatment. At the same time, we will be able to narrow down the antibiotic needed for a patient’s specific infection.”
Childress said this is key because treating with a broad-spectrum antibiotic to cover a wide range of bacterial infections that the patient may not have is what leads to bugs (illnesses) that are resistant to antibiotics.
“These are just some of the many benefits of having the MALDI-TOF,” Childress said.
For EAMC, being able to treat patients faster means greater outcomes for our patient population.
Patients will get better faster, leave the hospital sooner and have fewer adverse effects from the use of broad-spectrum antibiotics.
About East
Alabama Medical Center (EAMC)
East Alabama Medical Center is a 340-bed regional referral hospital located in Opelika that serves a six-county area. The EAMC organization includes EAMC-Lanier hospital in Valley; between the two hospitals and their collective service lines, there are about 3,300 employees in the organization. EAMC is Lee County’s second largest employer. Among the services that EAMC provides are open-heart surgery and cancer treatment, both of which are highly acclaimed specialties at EAMC. EAMC also operates non-mainstream services, including RehabWorks, HealthPlus Fitness Center, the Diabetes and Nutrition Center, the Wound Treatment Center and the Auburn University Medical Clinic. EAMC-Lanier has a nursing home, acute rehab unit, detox unit and offers occupational medicine.
For more information, visit www.eamc.org.