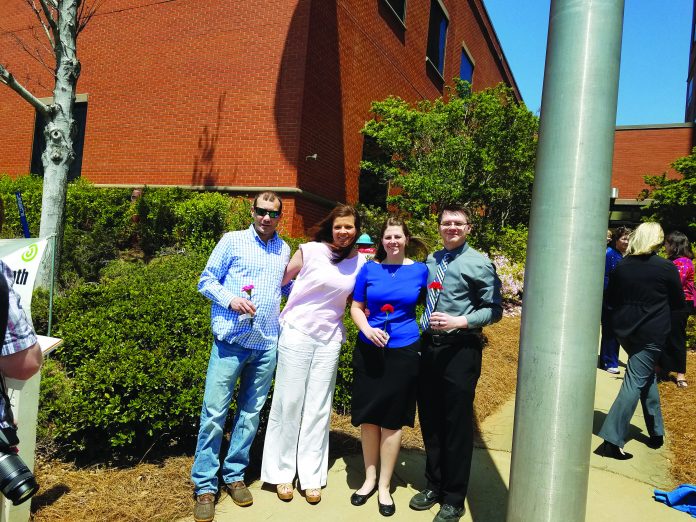 By Morgan Murphy
For the Opelika Observer

In honor of April being Organ Donation Month, East Alabama Medical Center held a ceremony last Friday acknowledging the impact that organ donation has on donors and recipients alike.
“Organ donation is such a critical part of touching the lives of others, making a difference in people’s lives, and it really is the ultimate gift,” said EAMC CEO Laura Grill.
Opelika Mayor Gary Fuller and Auburn Mayor Bill Ham followed with a proclamation stating April 2018 as “Organ Donation Month.”
The ceremony continued with three different stories.
Lydia Blanton shared her personal story where she underwent an open osteochondral allograft implantation on her right knee.
In August 2017, her 75-pound dog ran into the back of her legs and knocked her down. A pre-op MRI exam showed that the injury had caused a potential torn ACL and meniscus.
The initial surgery revealed that cartilage had been torn from the bone, and tissue was removed from the meniscus tear and repaired. Post-op MRIs on both knees showed massive bone infarcts in both upper and lower legs due to an autoimmune component.
Blanton was referred to Birmingham where she found out she qualified for a surgery where she would have to receive tissue from a donor in order to prevent the loss of her legs.
“The process of waiting to be matched with a donor can only be described as an all- consuming, intense, gripping, restless, sensitive experience,” Blanton said.
On December 20, 2017, a match was found, with surgery scheduled for two days later. She said the recovery process proved to be difficult.
“I will never forget how I felt on February 20, 2018 – 187 days, 6 months of being nonweight bearing, I walked for the first time without crutches. It was at that moment I knew how much my donor had forever changed me,” Blanton said.
Rachel Kring and Jill Hicks’ stories overlap with one another.
Kring saw a Facebook post where Hicks was asking for a live donor to give a kidney to her husband Neil. His kidney function had dropped to 9 percent in March, and dialysis was probable.
After testing, Kring found out she was a match.
After a successful operation last July, Kring said donating one of her kidneys was a decision she would definitely make again, if able.
“I would do it again in a heart beat if God gave us three kidneys,” Kring said.
Jill said she appreciates Krings’ sacrifice, which has given her husband a second chance at life.
“Without the organ there is no story, no hope, no transplant, but when there is an organ donor life springs from death, sorrow turns to hope and a terrible death becomes a gift,” Jill said.
For more information or to learn more about becoming a donor, visit www.donatelife.net
Editor’s Note: Organ donation is personal to my family. On May 22, my oldest son, at age 27, became one of the 495 lives saved by organ and tissue donation during 2017. We will be forever grateful for the gift that was given to him and our heartfelt prayers continue for the family of his donor.