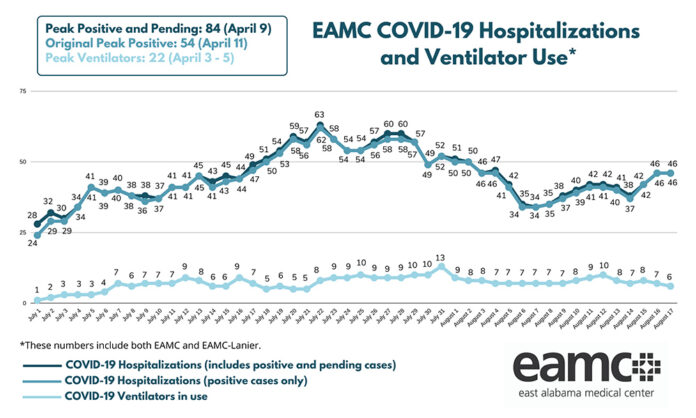 • On April 11, EAMC reached its first peak with 54 hospitalized patients

• For three straight days in early April, EAMC had 22 COVID patients on ventilators.

• By May 23, EAMC was down to 15 COVID hospitalizations, and just one on a ventilator.

• On 54 of those 62 days, EAMC had four or fewer COVID patients on ventilators.

“After a high number of early cases requiring hospitalization, the statewide Safe-At-Home order resulted in a marked decrease in our numbers to much more manageable levels,” Michael Roberts, M.D., hospitalist and EAMC Chief of Staff stated. “Even after reopening the economy, we saw numbers of hospitalized patients maintain at a level in May and June that was much lower than our initial surge.”

Roberts explains the current resurgence. “As we get more comfortable being around one another, and as we fatigue of COVID-19 restrictions, numbers have increased again and have sustained at higher levels than we saw earlier in the pandemic.”

At EAMC, mortality levels have dropped to almost a third what they were in March and April. “Obviously, that’s great news,” said Ricardo Maldonado, M.D., infectious diseases specialist at EAMC. He added that it brings with it a separate set of concerns.  “The patients we are now able to save remain sick for quite a while and spend a long time on supplemental oxygen and have multiple medical needs. Because of the long stays associated with the sickest of the patients with COVID-19, it would not take many new cases to fill our COVID-19 medical floor and our ICU.”

For perspective on the seriousness of COVID-19, Maldonado points to the CDC’s annual list of the leading causes of death in the U.S. “Looking at the most recent report (2017, but published last year), COVID-19 would now be the third leading cause of death. We just passed 170,000 deaths from COVID-19, while accidents accounted for 169,936 deaths in 2017. Only heart disease and cancer are higher.”

Roberts said strategies to limit the spread of COVID-19 remain the same. “Whenever possible, maintain at least 6 feet of space from people who are not from your household. When distancing is not possible, and any time you are indoors, wear a mask or cloth face covering. A simple surgical mask or multi-layer cloth face covering is adequate to decrease dispersion of respiratory droplets and therefore decrease the risk of transmission of the virus. Wash your hands frequently or use alcohol-based hand sanitizer.”

A LOOK AT THE CURRENT STATS

While the average number of COVID-19 hospitalizations per day was 45.85 between July 5 – Aug. 14, calls, testing and positive cases have mostly declined as a result of the mask mandate which went into effect July 16.  Here’s a look at some of the stats that stick out:

• Only 2 of the past 14 weekdays have resulted in more than 500 calls—both were Mondays.

• Aug. 10 saw 143 people tested at EAMC’s drive-thru test site.  That was the most of the past 13 days, but it would have been the second lowest of the preceding 12 days.

“There are definitely some positive signs in here,” John Atkinson, EAMC spokesman said. “We had four days where we recorded single digits for the number of positive tests. If we could get more of those and avoid all of those high counts on Mondays, we would feel better. We will also feel better if we don’t experience another peak in hospitalizations in the next two to three weeks as a result of school starting back. And it’s not too early to mention that our Labor Day weekend plans need to be low-key.”